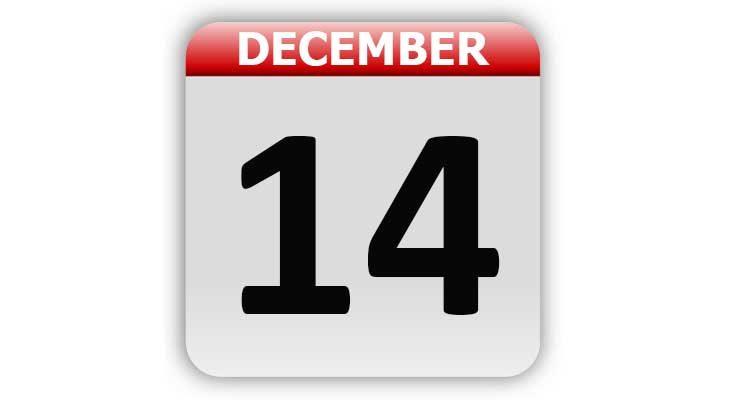 1836 – Michigan traded the Toledo strip for the Upper Peninsula.

1903 – Orville Wright made the first attempt at powered flight, but the engine stalled during take-off. The plane, the Wright Flyer, was damaged in the attempt. Repairs were made and three days later the modern aviation age was born when the plane stayed aloft for 12 seconds and flew 102 feet in Kitty Hawk, NC.

1962 – The U.S. space probe Mariner II became the first spacecraft to fly by Venus. It transmitted information about the planet’s atmosphere and surface temperature.

1964 – I-196 opened in Grand Rapids, MI. The city became the first in the nation to have two freeways intersect its downtown.

1969 – The Jackson 5 made their first appearance on “The Ed Sullivan Show”.

1986 – The experimental aircraft Voyager, piloted by Dick Rutan and Jeana Yeager, took off from California on the first non-stop, non-refueled flight around the world. The trip took nine days to complete.

1987 – Chrysler pleaded no contest to federal charges of selling several thousand vehicles as new when Chrysler employees had driven the vehicles with the odometer disconnected.

2004 – The Martin Scorsese film, “The Aviator”, starring Leonard DiCarprio, premiered in theaters. It would be nominated for 11 Oscars.

2008 – Muntadhar al-Zaidi threw his shoes at then President George W. Bush during a press conference in Baghdad, Iraq.

2011 – Fireworks became legal again in Michigan. The Michigan legislature passed a ban on the sale of fireworks back in 1927. That ban was lifted in 2011.

2012 – Twenty-eight people, including the gunman, were killed at the Sandy Hook Elementary School in Sandy Hook, CT.

2015 – The city of Flint, Michigan, declared a State of Emergency over contaminated water supplies.

2017 – The Walt Disney Company announced that it would acquire 21st Century Fox, including the 20th Century Fox movie studio, for $52.4 billion

Tags: A Look Back, Celebrity Birthdays, Days of the Year, December 14, Today in History