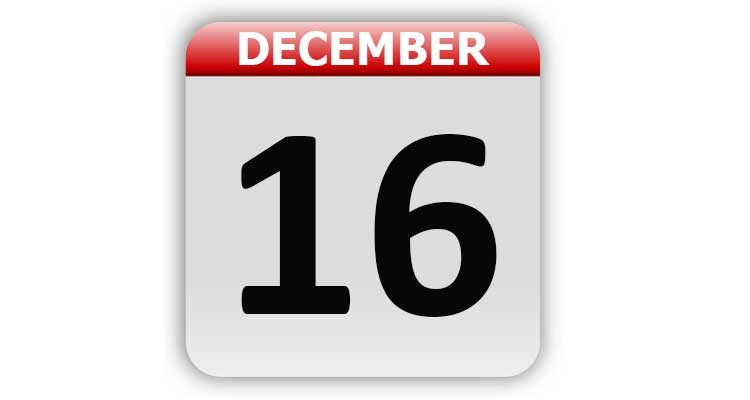 1773 – Nearly 350 chests of tea were dumped into Boston Harbor off of British ships by Colonial patriots. The patriots were disguised as Indians. The act was to protest taxation without representation and the monopoly the government granted to the East India Company.

1901 – “The Tale of Peter Rabbit,” by Beatrix Potter, was printed for the first time.

1903 – Women ushers were employed for the first time at the Majestic Theatre in New York, NY.

1912 – The first postage stamp to depict an airplane was issued. It was a 20 cent parcel-post stamp.

1937 – Theodore Cole and Ralph Roe attempted to escape from the Federal prison on Alcatraz Island in San Francisco Bay in California. Neither was seen again.

1951 – NBC debuted the television show “Dragnet” in a special preview on “Chesterfield Sound Off Time”. The show began officially on January 3, 1952.

1972 – The Miami Dolphins became the first NFL team to go unbeaten and untied in a 14-game regular season. The Dolphins went on to defeat the Washington Redskins in Super Bowl VII.

1995 – Many government functions were again closed as a temporary finance provision expired and the budget dispute between President Bill Clinton and Republicans in Congress continued.

1998 – Eric Michelman filed the earliest patent for a scroll wheel for a computer mouse.

1999 – Sigourney Weaver received a star on the Hollywood Walk of Fame.

2000 – Researchers announced that information from NASA’s Galileo spacecraft indicated that Ganymede appeared to have a liquid saltwater ocean beneath a surface of solid ice. Ganymede, a moon of Jupiter, is the solar system’s largest moon. The discovery is considered important since water is a key ingredient for life.

2009 – Astronomers discovered GJ1214b. It was the first-known exoplanet on which water could exist.

Tags: A Look Back, Celebrity Birthdays, Days of the Year, December 16, Today in History