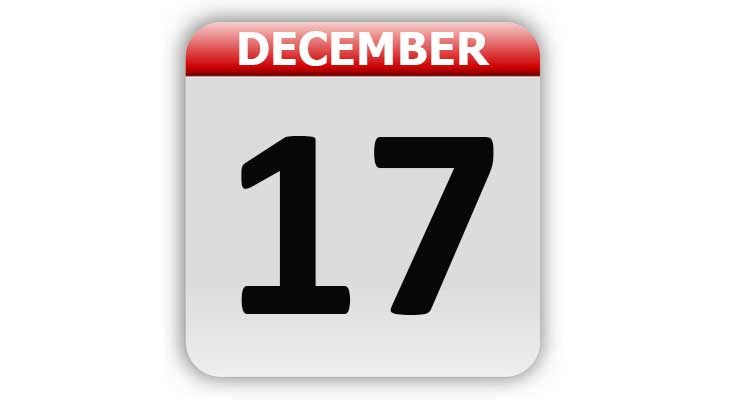 1791 – A traffic regulation in New York, NY, established the first “one way” street.

1888 – The Dental Society of Grand Rapids was organized.

1903 – Orville and Wilbur Wright made the first successful gasoline powered airplane flight in the Wright Flyer at Kitty Hawk, NC.

1908 – The first factory-made internal-combustion fire truck when into service in Lansing, MI.

1959 – The film “On the Beach” premiered in New York, NY and in 17 other cities. It was the first motion picture to debut simultaneously in major cities around the world.

1969 – The U.S. Air Force closed its Project “Blue Book” by concluding that there was no evidence of extraterrestrial spaceships behind thousands of UFO sightings.

1969 – Television history was made when Tiny Tim and Miss Vicki Budinger were married on “The Tonight Show” with Johnny Carson.

1975 – Lynette “Squeaky” Fromme was sentenced to life in prison for her attempt on the life of President Gerald Ford.

1976 – WTCG-TV, Atlanta, GA, changed its call letters to WTBS, and was up-linked via satellite. The station became the first commercial TV station to cover the entire United States.

1982 – The movie “Tootsie”,  starring Dustin Hoffman, Jessica Lange, Teri Garr, and Dabney Coleman, premiered in theaters.
1986 – Wayne Newton won a $19.2 million suit against NBC News. The network had aired reports claiming a link between Newton and mob figures. The reports were proven to be false.

1989 – The first full episode of the TV series “The Simpsons” aired in the United States. The episode was a Christmas special called “Simpsons Roasting on an Open Fire”. It has become the longest running American sitcom ever.

1999 – The movie “Stuart Little”, about a mouse who is adopted by the Little family, premiered in theaters. Michael J. Fox provided the voice for Stuart.

2002 – McDonald’s Corp. warned that they would report its first quarterly loss in its 47-year history.

2002 – The insurance and finance company Conseco Inc. filed for Chapter 11 protection. It was the third-largest bankruptcy in U.S. history.

2003 – SpaceShipOne, piloted by Brian Binnie, made its first powered and first supersonic flight.

2014 – The United States and Cuba re-established diplomatic relations after severing them in 1960.

Tags: A Look Back, Celebrity Birthdays, Days of the Year, December 17, Today in History