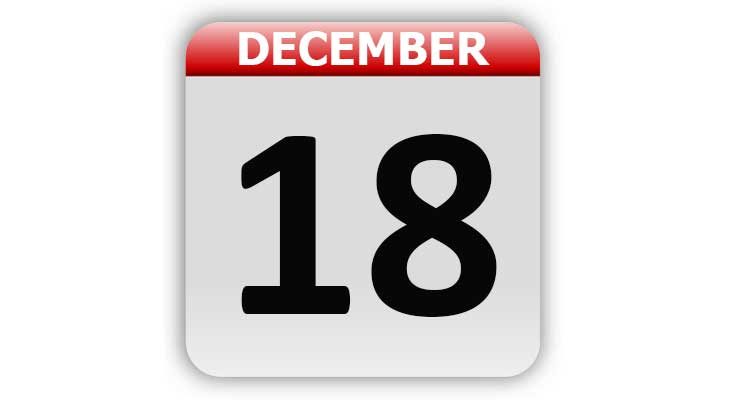 1787 – New Jersey became the third state to ratify the Constitution.

1796 – The “Monitor”, of Baltimore, MD, was published as the first Sunday newspaper.

1862 – The first orthopedic hospital was organized in New York, NY. It was called the Hospital for Ruptured and Crippled.

1865 – U.S. Secretary of State William Seward issued a statement verifying the ratification of the 13th Amendment to the U.S. Constitution. The amendment abolished slavery with the declaration: “Neither slavery nor involuntary servitude, except as a punishment for crime whereof the party shall have been duly convicted, shall exist within the United States, or any place subject to their jurisdiction.”

1903 – The Panama Canal Zone was acquired “in perpetuity” by the United States for an annual rent.

1917 – The Eighteenth Amendment to the Constitution was passed by the Senate and then officially proposed the states.

1927 – Michigan’s first solid yellow “no passing” lines were painted on the state’s highways.

1932 – The Chicago Bears defeated the Portsmouth Spartans in the first NFL Championship Game.

1936 – Su-Lin, the first giant panda to come to the United States from China, arrived in San Francisco, CA. The bear was sold to the Brookfield Zoo for $8,750.

1953 – WPTZ, in Philadelphia, PA, presented a Felso commercial, it was the first color telecast seen on a local station.

1956 – The television game show “To Tell the Truth” debuted on CBS.

1957 – The Shippingport Atomic Power Station in Pennsylvania went online. It was the first nuclear facility to generate electricity in the United States. It was taken out of service in 1982.

1966 – The animated TV special “How the Grinch Stole Christmas!” aired for the first time on CBS.

1979 – The sound barrier was broken on land for the first time by Stanley Barrett when he drove at 739.6 mph.

1987 – Ivan F. Boesky was sentenced to three years in prison for plotting Wall Street’s biggest insider-trading scandal. He only served about two years of the sentence.

1997 – The Michigan Gray Wolf Recovery and Management Plan was put into effect by the state Department of Natural Resources.

1998 – The House of Representatives began the debate on the four articles of impeachment concerning President Bill Clinton. It was only the second time in U.S. history that process had begun.

2001 – A fire damaged St. John Cathedral in New York, NY. The cathedral is the largest in the United States.

2002 – Nine competing designs for the World Trade Center site were unveiled. The Lower Manhattan Development Corp. expected to choose a design by January 31, 2003.

2003 – Lee Malvo was found guilty of one murder in the October, 2002 shooting spree that killed 10 people around the Washington, DC area. A Virginia jury sentences him to life in prison.

2003 – Actor Adam Rich, once a star on TV’s “Eight Is Enough”, was arrested for driving onto a closed section of Interstate 10 and nearly striking a California Highway Patrol car.

2003 – In Santa Maria, CA, Michael Jackson was charged with seven counts of molesting a child under 14 and two counts of supplying the child with “an intoxicating agent”. Jackson’s lawyer denounced the allegations and said they were driven by money and revenge.

2009 – General Motors announced that it would shut down its Saab brand.

2009 – A Paris court ruled that Google was breaking French law with its policy of digitizing books and fined the company a $14,300-a-day fine until it rid its search engine of the literary extracts.

2009 – James Cameron’s movie “Avatar” was released in the United States. On January 26, the movie became the highest-grossing film worldwide.

2019 – The House of Representatives voted to impeach President Donald Trump for abuse of power and for obstruction of Congress, with the votes falling almost entirely along party lines. He’s only the third American president in history impeached by the House.

Tags: A Look Back, Celebrity Birthdays, Days of the Year, December 18, Today in History