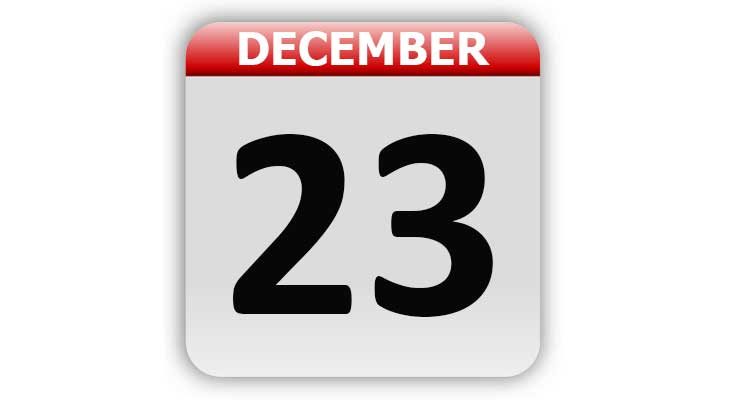 1788 – Maryland voted to cede a 100-square-mile area for the seat of the national government. About two-thirds of the area became the District of Columbia.

1823 – The poem “A Visit From St. Nicholas” by Clement Moore, also known as “‘Twas the Night before Christmas…”, was published.

1856 – Ralph Collier was issued a patent for the first rotary egg beater.

1888 – Following a quarrel with Paul Gauguin, Dutch painter Vincent Van Gogh cut off part of his own ear.

1942 – Comedian Bob Hope agreed to entertain U.S. airmen in Alaska. It was the first of the traditional Christmas shows.

1947 – The transistor was invented by John Bardeen, Walter H. Brattain and William Shockley. It was first demonstrated at Bell Laboratories.

1951 – For the first time, an NFL championship game was televised nationally. The Los Angeles Rams beat the Cleveland Browns 24-17. The DuMont Network paid $75,000 for the rights to the game.

1972 – The 16 survivors of the Andes flight disaster were rescued after 73 days, having reportedly survived by cannibalism.

1986 – The experimental airplane “Voyager” completed the first non-stop, around-the-world flight without refueling as it landed safely at Edwards Air Force Base in California. It was piloted by Dick Rutan and Jeana Yeager.

1987 – Lynette “Squeaky” Fromme, who was serving a life sentence for the attempted assassination of President Gerald Ford in 1975, escaped from the Alderson Federal Prison for Women in West Virginia. She was recaptured two days later.

1997 – Terry Nichols was convicted by a Denver jury on charges of conspiracy and involuntary manslaughter in the 1995 federal building bombing in Oklahoma City, OK. The bomb killed 168 people.

2003 – America reported its first case of mad cow disease when a slaughtered cow from a Washington farm tested positive for the illness. Several countries subsequently banned the importation of beef from the U.S.

Tags: A Look Back, Celebrity Birthdays, Days of the Year, December 23, Today in History