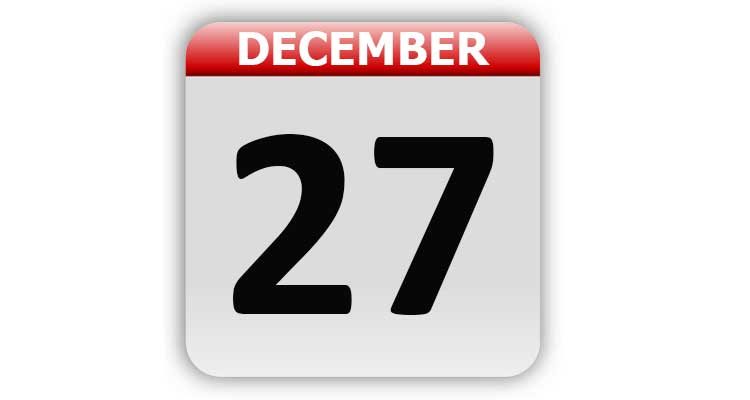 1845 – Dr. Crawford Williamson Long used anesthesia (ether) during childbirth for the first time for the delivery of his own child in Jefferson, GA.

1932 – Radio City Music Hall, “Showplace of the Nation”, in New York, NY, opened its doors to the public for the first time.

1947 – The children’s television program “Howdy Doody,” hosted by Buffalo Bob Smith, made its debut on NBC.

1951 – A Crosley automobile, with a steering wheel on the right side, became the first vehicle of its kind to be placed in service for mail delivery in Cincinnati, OH.

1965 – In Fort Lauderdale, FL, the initial part of the International Swimming Hall of Fame was dedicated.

1968 – Apollo 8 splashed down in the Pacific Ocean ending the first orbital manned mission to the Moon.

1971 – Snoopy, Charlie Brown, Linus, Lucy and Woodstock of Charles Schulz’ “Peanuts” comic strip were on the cover of “Newsweek” magazine.

1989 – The album “Grandma Got Run Over By a Reindeer” by Elmo and Patsy was certified gold.

2002 – Clonaid, a company founded by a religious sect that believe in space aliens, announced it had produced the world’s first cloned baby. The baby had been born December 26.

Tags: A Look Back, Celebrity Birthdays, Days of the Year, December 27, Today in History