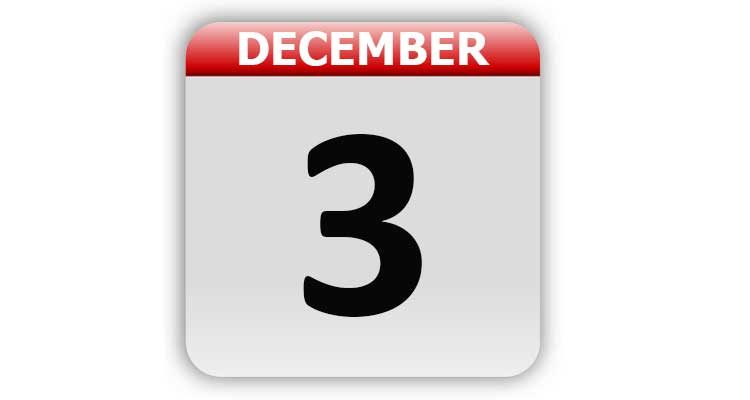 1828 – Andrew Jackson was elected President of the United States.

1833 – Oberlin College in Ohio opened as the first truly co-educational school of higher education in the United States.

1910 – Developed by French physicist Georges Claude, the neon lamp was displayed for the first time, at the Paris Motor Show.

1968 – The rules committee of Major League Baseball announced that in 1969 the pitcher’s mound would be lowered from 15 to 10 inches. This was done in order to “get more batting action”.

1979 – At Cincinnati’s Riverfront Coliseum, eleven Who fans were trampled to death in the rush to get inside for general (unreserved) seats to the band’s concert.

1982 – Doctors at the University of Utah Medical Center safely removed a respirator from Barney Clark one day after the retired dentist became the world’s first recipient of a permanent artificial heart.

1982 – A soil sample was taken from Times Beach, MO, that was found to contain 300 times the safe level of dioxin.

1990 – A collision on the ground of a Northwest Airline DC9 and a Northwest Boeing 727 at Detroit Metropolitan Airport resulted in a fire and claimed eight lives.

1991 – Disk jockey Alan Freed received a star on The Hollywood Walk of Fame.

1992 – A test engineer for Sema Group used a personal computer to send the world’s first text message via the Vodafone network to the phone of a colleague.

1993 – Britain’s Princess Diana announced she would be limiting her public appearances because she was tired of the media’s intrusions into her life.

1994 – The PlayStation was released in Japan.

1997 – Actor Pierce Brosnan received a star on the Hollywood Walk of Fame.

1999 – Tori Murden became the first woman to row across the Atlantic Ocean alone. It took her 81 days to reach the French Caribbean island of Guadeloupe from the Canary Islands.

2004 – The iTunes Music Store was launched in Canada.

2017 – An attempt was made at imploding the Pontiac Silverdome, former home of the Detroit Lions, in Pontiac, MI. The structure did not collapse as expected. It would finally be knocked down the next day.

National Roof Over Your Head Day

Tags: A Look Back, Celebrity Birthdays, Days of the Year, December 3, Today in History