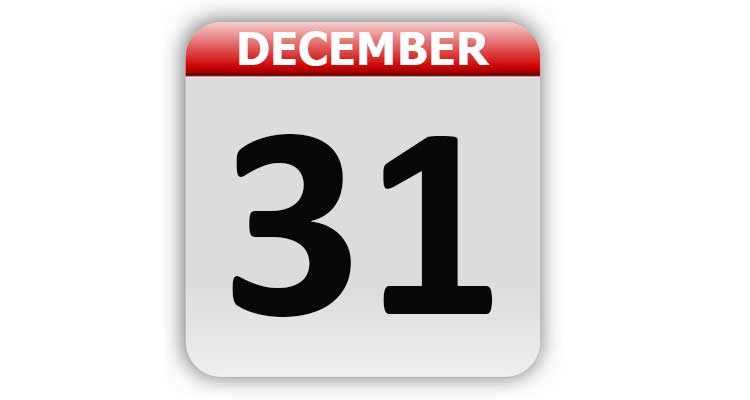 1841 – The State of Alabama enacted the first dental legislation in the U.S.

1877 – President Rutherford B. Hayes became the first U.S. President to celebrate his silver (25th) wedding anniversary in the White House.

1891 – New York’s new Immigration Depot was opened at Ellis Island, to provide improved facilities for the massive numbers of arrivals.

1929 – Guy Lombardo and his Royal Canadians played “Auld Lang Syne” as a New Year’s Eve song for the first time.

1935 – The Parker Brothers received a patent for their board game “Monopoly”.

1940 – As a result of a dispute between the radio networks and the American Society of Composers and Publishers [ASCAP], the radio industry began a ten month ban on playing ASCAP licensed music.

1953 – Jockey Willie Shoemaker broke his own record, winning his 485th race of the year.

1955 – General Motors became the first corporation in the United States to earn more than a billion dollars in a single year.

1967 – Daredevil Evel Knievel lost control of his motorcycle during a jump of 141 feet over the fountains in front of Caesar’s Palace in Las Vegas, NV. In the crash, he suffered a crushed pelvis and femur, fractures to his hip, wrist, and both ankles and a concussion. He spent nearly a month in a coma.

1967 – The Green Bay Packers won the National Football League championship game by defeating the Dallas Cowboys 21-17. The game, played at a wind chill factor of -40 degrees, is dubbed “The Ice Bowl.”

1974 – Private citizens were allowed to buy and own gold for the first time in more than 40 years.

1983 – The AT&T Bell System was broken up by the United States Government.

1985 – Ricky Nelson and six others died in an airplane crash near DeKalb, TX. A fire had broken out on the plane.

1999 – The United States Government handed control of the Panama Canal (as well as all the adjacent land to the canal known as the Panama Canal Zone) over to Panama. The act complied with the signing of the 1977 Torrijos-Carter Treaties.

2011 – NASA succeeded in putting the first of two Gravity Recovery and Interior Laboratory satellites in orbit around the moon.

2019 – The World Health Organization is informed of cases of pneumonia with an unknown cause, detected in Wuhan, China. This later turned out to be COVID-19 — the cause of the COVID-19 pandemic.

2020 – The World Health Organization’s issued their first emergency use validation for a COVID-19 vaccine.

Make Up Your Mind Day

Tags: A Look Back, Celebrity Birthdays, Days of the Year, December 31, Today in History