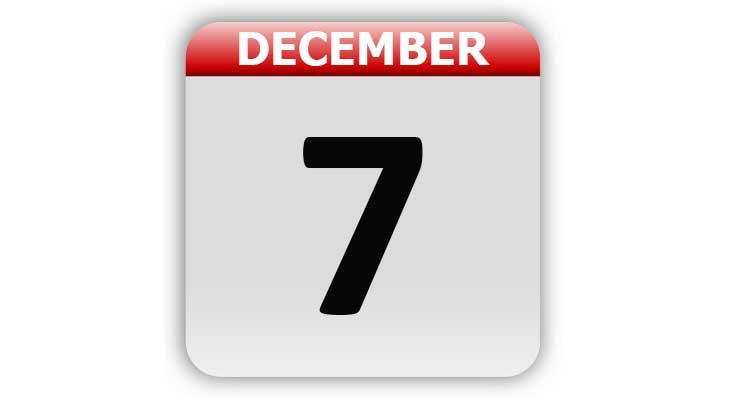 1787 – Delaware became the first state to ratify the U.S. Constitution becoming the first of the United States.

1796 – John Adams was elected to be the second President of the United States.

1836 – Martin VanBuren was elected the eighth President of the United States.

1854 – The steamer “Westmoreland” sank near Sleeping Bear Dunes in Lake Michigan. It was rumored to have had 280 barrels of whiskey on board along with $10,000 in gold coins. The shipwreck was finally found in 2010.

1926 – The gas operated refrigerator was patented by The Electrolux Servel Corporation.

1930 – The first television commercial in the United States was broadcast in Boston, MA. The commercial was for I.J. Fox Furriers.

1941 – Pearl Harbor, located on the Hawaiian island of Oahu, was attacked by nearly 200 Japanese warplanes. The attack resulted in the U.S. entering into World War II.

1963 – CBS became the first network to use “instant replay” during a nationally televised sporting event. A fourth-quarter touchdown by Army quarterback Rollie Stichweh was played back moments after it took place during the Army-Navy football game at Philadelphia, PA.

1972 – Apollo 17 was launched at Cape Canaveral, FL. It was the last U.S. Moon mission. The crew took the photograph known as “The Blue Marble” as they left the Earth.

1982 – Charlie Brooks Jr., a convicted murderer, became the first prisoner in the U.S. to be executed by injection, at a prison in Huntsville, TX.

1987 – The MTV game show “Remote Control” debuted. It was hosted by Ken Ober and featured Colin Quinn as the announcer/sidekick.

1990 – Johnny Depp and Tim Burton teamed up for the first time when “Edward Scissorhands” was released in theaters.

1995 – A probe sent from the Galileo spacecraft entered into Jupiter’s atmosphere. The probe sent back data to the mother-ship before it was destroyed. It had been launched by Space Shuttle Atlantis six years earlier.

1996 – The Space Shuttle Columbia returned from the longest-ever shuttle flight of 17 days, 15 hours and 54 minutes.

2001 – A double-album of music from “America: A Tribute to Heroes”, the three hour telethon staged just days after the September 11th terrorist attacks, was certified gold three days after its release.

2003 – A 12 x 26 inch painting of a river landscape and sailing vessel by Martin Johnson Heade was sold at auction for $1 million. The painting was found in the attic of a suburban Boston, MA home where it had been stored for more than 60 years.

Tags: A Look Back, Celebrity Birthdays, Days of the Year, December 7, Today in History