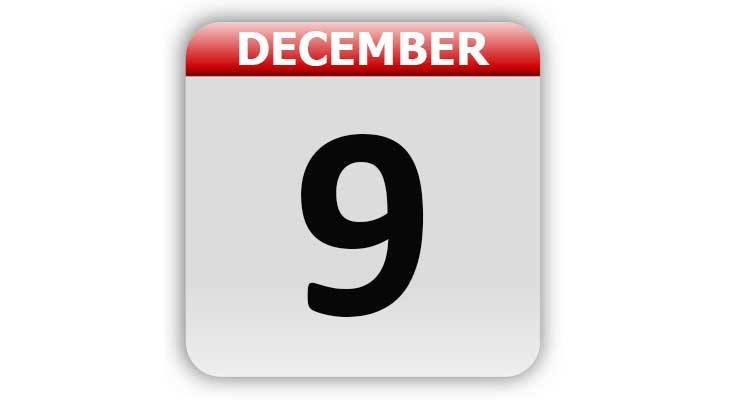 1793 – “The American Minerva” was published for the first time. It was the first daily newspaper in New York City and was founded by Noah Webster.

1803 – The 12th Amendment to the U.S. Constitution was passed by Congress. With the amendment Electors were directed to vote for a President and for a Vice-President rather than for two choices for President.

1851 – The first YMCA in North America was established in Montreal.

1907 – Christmas Seals went on sale for the first time, in the Wilmington, DE, post office.

1926 – The United States Golf Association legalized the use of steel-shafted golf clubs.

1914 – The Edison Phonograph Works was destroyed by fire.

1962 – The Petrified Forest National Park was established in Arizona.

1965 – The first Peanuts TV special, “A Charlie Brown Christmas”, aired for the first time on CBS. It was the first television special based on the “Peanuts” comic strip.

1965 – A fireball was seen from Michigan to Pennsylvania. Witnesses reported something crashing in the woods near Pittsburgh, PA. In 2005 NASA admitted that they examined the object.

1978 – The first game of the Women’s Pro Basketball League was played between the Chicago Hustle and the Milwaukee Does.

1979 – The eradication of the smallpox virus was certified, making smallpox the first and to date only human disease driven to extinction.

1984 – The Jacksons played their last show together in Los Angeles, CA.

1990 – The first American hostages to be released by Iran began arriving in back in the United States.

1993 – The U.S. Air Force destroyed the first of 500 Minuteman II missile silos that were marked for elimination under an arms control treaty.

1993 – Astronauts aboard the Space Shuttle Endeavor completed repairs to the Hubble Space Telescope.

2002 – United Airlines filed for Chapter 11 bankruptcy after losing $4 billion in the previous two years. It was the sixth largest bankruptcy filing.

2005 – The movie “The Chronicles of Narnia: The Lion, the Witch and the Wardrobe”, based on a series of novels by C. S. Lewis, premiered in theaters.

2008 – The Governor of Illinois, Rob Blagojevich, was arrested by federal officials for crimes including attempting to sell the U.S. Senate seat being vacated by Barak Obama’s being elected President.

2008 – NBC announced that Jay Leno would stay with the network, to host a weekday prime time show in 2009.

2013 – AMR Corporation and US Airways Group completed a merger to become the American Airlines Group, Inc.

Tags: A Look Back, Celebrity Birthdays, Days of the Year, December 9, Today in History