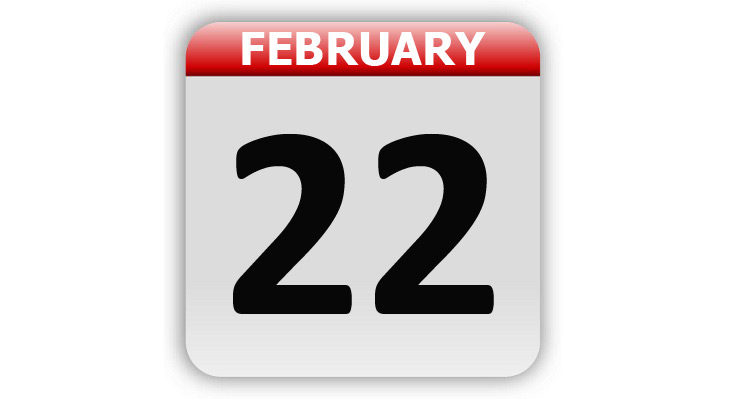 1849 – The first school house built in Grand Rapids, MI, just for school, burned to the ground.

1854 – The first ever meeting of the new Republican Party in Jackson, MI.

1855 – Congress voted to appropriate $200,000 to continue the work on the Washington Monument. The next morning the resolution was tabled and it would be 21 years before the Congress would vote on funds again. Work was continued by the Know-Nothing Party in charge of the project.

1885 – The Washington Monument was officially dedicated in Washington, DC. It opened to the public in 1889.

1920 – The first dog race track to use an imitation rabbit opened in Emeryville, CA.

1923 – The first successful chinchilla farm opened in Los Angeles, CA. It was the first farm of its kind in the U.S.

1973 – Hermus Millsaps of Taylor, MI, became the first Michigan lottery million dollar winner. Millsaps and his wife went to Lansing to collect their winnings and spent all of their money on bus tickets to get there. They didn’t have the money for bus fare to get home. A lottery agent drove the couple home.

1974 – The final episode of the “Sonny and Cher Comedy Hour” was taped, less than a week after the couple filed for divorce. Despite being the eighth most watched show in prime time, CBS cancelled the series on May 29th.

1980 – The United States Olympic hockey team upset the Soviets in Lake Placid, NY, 4-3 in a win that came to be known as “the miracle on ice”. The U.S. team went on to win the gold medal.

1983 – Smokey Robinson became the 1,759th celebrity on the Hollywood Walk of Fame.

1984 – The U.S. Census Bureau statistics showed that the state of Alaska was the fastest growing state of the decade with an increase in population of 19.2%.

1989 – Milli Vanilli won a Grammy for Best New Artist. It was admitted later that they were not the vocalists on the album.

2006 – Someone in Michigan purchased the one billionth song on iTunes. The song was Coldplay’s “Speed of Sound”.

2010 – A copy of “Action Comics #1” sold at auction for $1 million. The comic featured the introduction of Superman.

Tags: A Look Back, Celebrity Birthdays, Days of the Year, February 22, Today in History