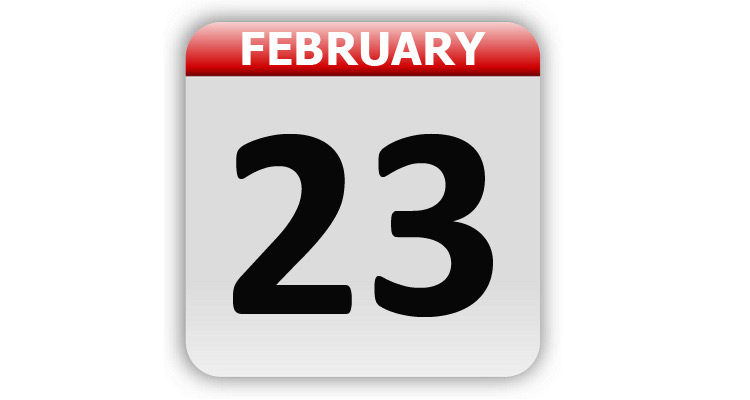 1861 – President-elect Abraham Lincoln arrived secretly in Washington, DC to take his office after an assassination attempt in Baltimore, MD.

1870 – The state of Mississippi was readmitted to the Union.

1904 – The United States acquired control of the Panama Canal Zone for $10 million.

1905 – The Rotary Club (the world’s first service club) was founded in Chicago, IL, by Attorney Paul Harris and three others.

1910 – In Philadelphia, PA, the first radio contest was held.

1927 – President Calvin Coolidge signed a bill by Congress establishing the Federal Radio Commission which began assigning frequencies, hours of operation and power allocations for radio broadcasters. On July 1, 1934 the name was changed to the Federal Communications Commission (FCC).

1945 – The 28th Regiment of the Fifth Marine Division of the U.S. Marines reached the top of Mount Surabachi. A photograph of these Marines raising the American flag was taken.

1954 – The first mass vaccination of children against polio with the Salk vaccine began in Pittsburgh, PA.

1963 – The 24th Amendment to the U.S. Constitution was ratified. It prohibited poll taxes in Federal elections.

1964 – The Beatles appeared on The Ed Sullivan Show for the third consecutive week. The segment was taped on the afternoon of February 9th. They performed “Twist and Shout,” “Please Please Me” and “I Want to Hold Your Hand.”

1968 – Wilt Chamberlain, of the Philadelphia 76ers, became the first player to score 25,000 career points in the NBA.

1974 – The Symbionese Liberation Army demanded $4 million more for the release of Patty Hearst. Hearst was kidnapped on February 4th.

1985 – The TV show “Gimme a Break” was broadcast live before a studio audience. It was the first TV sitcom to be seen live since the 1950’s.

1994 – The ground breaking ceremony for the Hard Rock Hotel and Casino in Las Vegas, NV occurred.

1997 – NBC aired the movie “Schindler’s List”. It was completely uncensored.

2000 – Robby Knievel made a successful motorcycle jump of 200 feet over an oncoming train.

2005 – The New York, NY, city medical examiner’s office announced that it had exhausted all efforts to identify the remains of the people killed at the World Trade Center on September 11, 2001, due to the limits of DNA technology. About 1,600 people had been identified leaving more than 1,100 unidentified.

Tags: A Look Back, Celebrity Birthdays, Days of the Year, February 23, Today in History