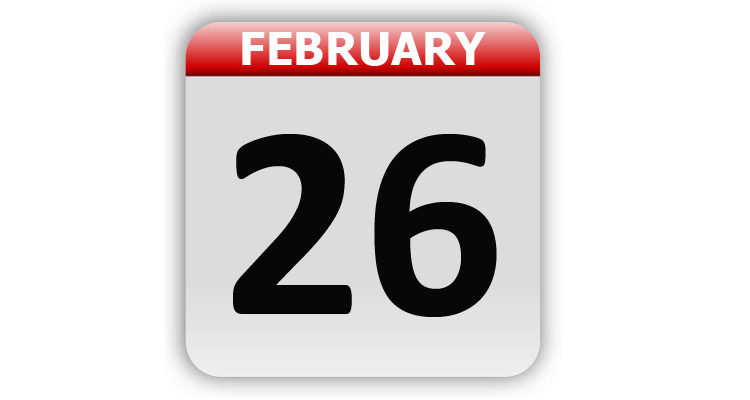 1836 – William Austin Burt received a patent for his solar compass. Using his product, he and his crew surveyed much of the state of Michigan.

1870 – In New York, NY, the first pneumatic-powered subway line opened to the public.

1933 – A ground-breaking ceremony was held at Crissy Field for the Golden Gate Bridge in San Francisco, CA.

1935 – The New York Yankees released Babe Ruth from his contract.

1955 – Billboard reported that the 45 rpm single was outselling 78 rpm records for the first time.

1964 – The day after defeating Sonny Liston for the world heavyweight crown, Cassius Clay (who later changed his name to Muhammad Ali) announced that he had joined the Nation of Islam and wished to be known as Cassius X.

1993 – Six people were killed and more than a thousand injured when a van exploded in the parking garage beneath the World Trade Center in New York, NY. The bomb had been built by Islamic extremists.

1998 – A Texas jury rejected an $11 million lawsuit by Texas cattlemen who blamed Oprah Winfrey for a drop in the price of beef after an on-air comment about mad-cow disease.

2008 – Walmart remained the number one music seller in the United States. However, Apple announced that the iTunes Store had surpassed Best Buy to become the second largest music seller.

2009 – Grand Rapids, MI radio personality Rick Beckett had a heart attack and passed away. He had been working at WOOD Radio with Scott Winters on “The Rick and Scott Show”. Previously he had worked at WGRD, WKLQ and WZZR (now WLHT).

2009 – The Pentagon reversed its 18-year policy of not allowing media to cover returning war dead. The reversal allowed some media coverage with family approval.

2012 – Inside a gated community in Sanford, FL, neighborhood watch volunteer George Zimmerman shot and killed an unarmed 17 year old, Trayvon Martin, who was staying with family. Zimmerman was interviewed by police and released without any charges being filed.

Tags: A Look Back, Celebrity Birthdays, Days of the Year, February 26, Today in History