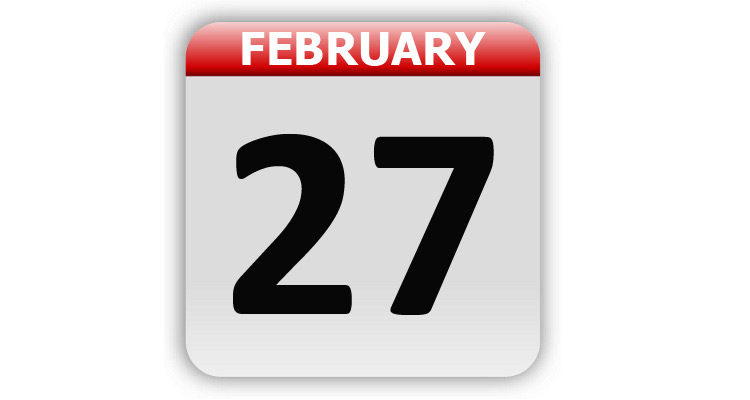 1801 – The city of Washington, DC, was placed under congressional jurisdiction.

1827 – In New Orleans, LA, a group of masked students partied and danced in the streets for the first citywide Mardi Gras celebration.

1836 – Russell Alexander Alger was born in Ohio. The Grand Rapids lumberman became a U.S. Senator, Governor of Michigan, a Civil War General, Commander in Chief of Grand Army of the Republic. He was one of the state’s richest men. Alger School, Alger Street, and Alger Heights were named after him.

1896 –  A picture of an X-ray photograph made by Dr. H.L. Smith was published in the “Charlotte Observer”. The photograph showed a perfect picture of all the bones of a hand and a bullet that Smith had placed between the third and fourth fingers in the palm.

1900 – The patent for aspirin was granted in the United States.

1922 – The U.S. Supreme Court upheld the 19th Amendment that guaranteed women the right to vote.

1951 – The 22nd Amendment to the U.S. Constitution was ratified, limiting Presidents to two terms.

1970 – Jefferson Airplane was fined $1,000 for using profanity during a concert in Oklahoma City, OK.

1974 – The first issue of “People” magazine was published.

1981 – Chrysler Corporation was granted an additional $400 million in federal loan guarantees. Chrysler had posted a loss of $1.7 billion in 1980.

1984 – A Pepsi commercial featuring the Jacksons premiered on MTV.

1986 – The U.S. Senate approved the telecast of its debates on a trial basis.

1990 – The Exxon Corporation and Exxon Shipping were indicted on five criminal counts in reference to the 1989 Exxon Valdez oil spill.

1997 – Don Cornelius, host of television’s “Soul Train”, received a star on the Hollywood Walk of Fame.

1999 – Colin Prescot and Andy Elson set a new hot air balloon endurance record when they had been aloft for 233 hours and 55 minutes. The two were in the process of trying to circumnavigate the Earth.

2002 – In Boston, MA, twenty people working at Logan International Airport were charged with lying to get their jobs or security badges.

Tags: A Look Back, Celebrity Birthdays, Days of the Year, February 27, Today in History