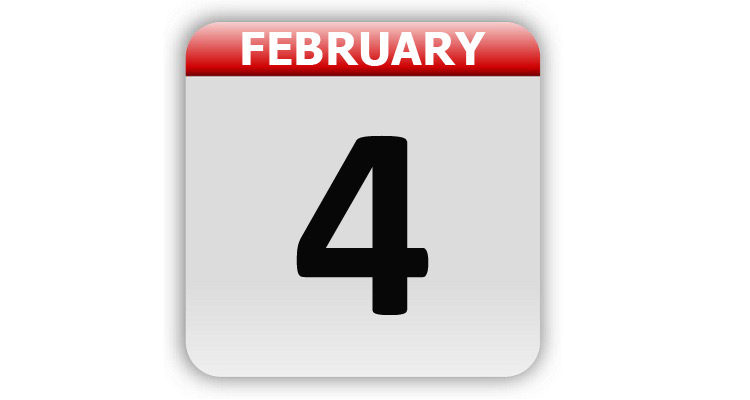 1789 – George Washington was unanimously elected as the first President of the United States by the Electoral College.

1847 – In Maryland, the first U.S. Telegraph Company was established.

1902 – Charles Lindbergh was born in Detroit, MI. He made his historic first solo Atlantic flight in 1927.

1913 – Louis Perlman received a patent for his demountable tire-carrying rims.

1932 – The first Winter Olympics were held in the United States at Lake Placid, NY.

1952 – Jackie Robinson was named Director of Communication for NBC. He was the first black executive of a major radio-TV network.

1962 – Actor Danny Thomas founded St. Jude Children’s Hospital, dedicated to helping children with catastrophic diseases at no cost to them or their families.

1964 – The Administrator of General Services announced that the 24th Amendment to the U.S. Constitution had been ratified. The amendment banned the poll tax.

1967 – Lunar Orbiter 3 lifted off from Cape Canaveral’s Launch Complex 13 on its mission to identify possible landing sites for the Surveyor and Apollo spacecraft.

1974 – Newspaper heiress Patty Hearst was kidnapped in Berkeley, CA, by a radical group calling itself the Symbionese Liberation Army.

1977 – A Chicago, IL Transit Authority elevated train rear-ended another and derailed, killing 11 and injuring 180 — the worst accident in the agency’s history.

1985 – President Ronald Reagan’s defense budget called for a tripling of the expenditure on the “Star Wars” research program.

1997 – A civil jury in California found O.J. Simpson liable in the death of his ex-wife Nicole Brown Simpson and her friend Ron Goldman. Goldman’s parents were awarded $8.5 million in compensatory damages.

1997 – Mario Lemieux, of the Pittsburgh Penguins, scored his 600th National Hockey League goal during his 719th game. Lemieux reached the milestone second fastest in history. Gretzky had reached the plateau during his 718th game.

1999 – Freddy Fender received a star on the Hollywood Walk of Fame.

1999 – Gary Coleman was sentenced to a $400 fine, a suspended 90-day jail sentence, and ordered to attend 52 anger management classes as punishment for assaulting an autograph seeker on July 30, 1998.

Tags: A Look Back, Celebrity Birthdays, Days of the Year, February 4, Today in History