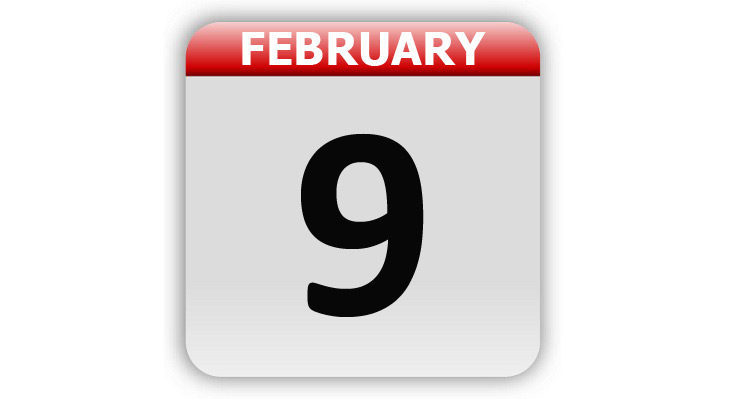 1825 – The U.S. House of Representatives elected John Quincy Adams as President. No candidate had received a majority of electoral votes.

1870 – The United States Weather Bureau was authorized by Congress. The bureau is officially known as the National Weather Service (NWS).

1932 – America entered the 2-man bobsled competition for the first time at the Olympic Winter Games held at Lake Placid, NY.

1934 – Lowest temperature ever recorded in the state of Michigan… -51 at Vanderbilt.

1951 – Trying to dodge the draft by being guilty of a small crime, Richard Shay sets fire to the Michigan State Offices in Lansing. The fire caused $5 million in damage.

1964 – The Beatles made the first of three record-breaking appearances on TV’s “The Ed Sullivan Show” before a record breaking audience of 73 million television viewers.

1971 – Satchel Paige became the first Negro League player to be voted into the Baseball Hall of Fame.

1971 – The Apollo 14 spacecraft returned to Earth after the third manned Moon landing.

1997 – With their 167th episode, “The Simpsons” became the longest-running prime-time animated series, taking the record previously held by “The Flintstones”. The show still holds the record.

1999 – A California jury awarded the largest judgment ever reached in a smoking related case. A woman said that her inoperable lung cancer was caused by decades of smoking cigarettes, primarily the Philip Morris Marlboro brand. She was awarded $51.5 million.

1999 – The Reverend Jerry Falwell insisted that “Tinky Winky”, the purple Teletubby, was gay.

2002 – Conan O’Brien signed an $8 million a year deal to stay at his Late Night desk for another four years.

2004 – Diana Ross pleaded guilty to DUI charges in Tucson, AZ, and was ordered to spend two days in jail.

2018 – The opening ceremony for the Winter Olympics took place in Pyeongchang County in South Korea.

National Read in the Bathtub Day

Tags: A Look Back, Celebrity Birthdays, Days of the Year, February 9, Today in History