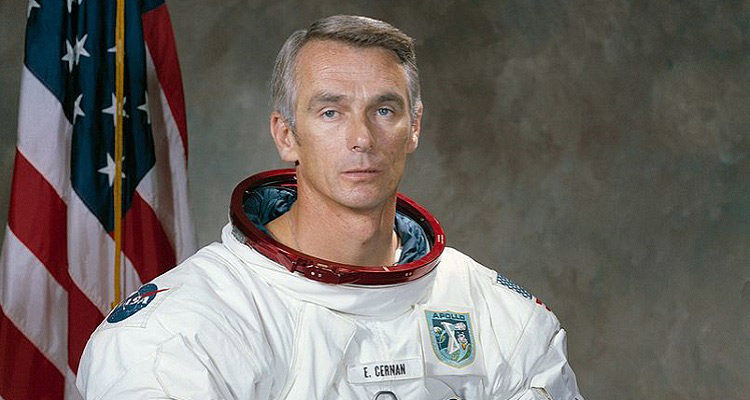 Former astronaut Gene Cernan, who was the last man to walk on the moon, died surrounded by his family on Monday, January 16, 2017, at age 82. His family said he had ongoing health issues, but his cause of death was not immediately known.

Cernan was recruited by NASA in 1963 and went into space three years later. He also took part in a Gemini spaceflight in 1965 and in Apollo 10, the last mission before the one that put Neil Armstrong on the moon in July 1969.

In December 1972, Cernan and Apollo 17 crewmate Harrison Schmitt spent three days on the moon. Cernan was the commander of Apollo 17, which was the last lunar mission and one of the final Apollo flights. When Cernan stepped out from lunar module “Challenger” he became the 11th person to walk on the moon. Schmitt was the 12th. As commander, Cernan was the last to re-enter the lunar module, giving him the designation of being the last person to walk on the moon’s surface. As he entered the lunar lander for the return home, he offered a message of “peace and hope for all mankind.” He also traced the initials of his 9-year-old daughter into the dust of the lunar surface.

According to NASA, Cernan logged 566 hours and 15 minutes in space, of which 73 hours were spent on the surface of the moon.

Born in Chicago in 1934, Cernan received an electrical engineering degree from Purdue and a Masters of Science in aeronautical engineering from the U.S. Naval Postgraduate School. A captain in the Navy, he was selected in NASA’s third group of astronauts in 1963. He retired from NASA and the Navy in 1976.

Cernan’s death leaves six astronauts remaining who have walked on the moon.

To read more about Gene Cernan, here is his Wikipedia page.

Here is CNN’s video on the death of Gene Cernan…