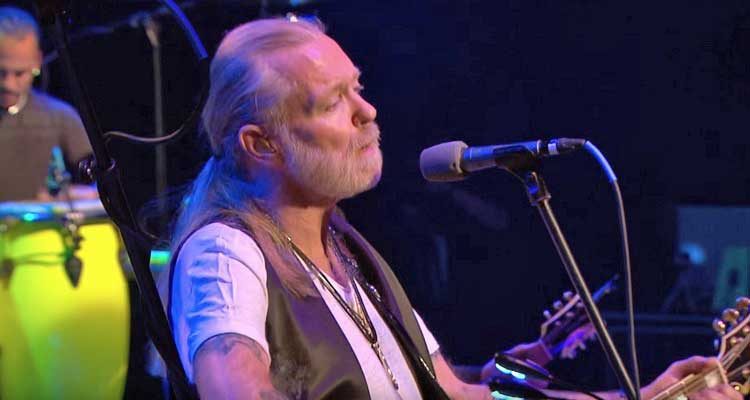 Gregg Allman, of the Allman Brothers Band, died on Saturday, May 27th, 2017 due to complications from liver cancer. He was 69.

Allman passed away at his home in Savannah, GA, surrounded by his family and friends. No funeral date has been set, however he will be buried at Rose Hill cemetery in Macon, GA. The two other founding members of the Allman Brothers — guitarist Duane Allman and bassist Berry Oakley — are also buried at that Cemetery.

Allman wrote some of the bands signature songs, including “Midnight Rider”, “Wasted Words”, “Melissa”, and “Whipping Post”. The Allman Brothers were inducted into the Rock and Roll Hall of Fame in 1995

Allman continued recording and touring for some 40 years. His last stage performance was just two days before Halloween in Atlanta, CA on October 29, 2016. After that show, he cancelled a series of concerts. He said it was “the hardest thing I’ve had to do in a long, long time. I’ve been on the road for 45 years because I live to play music with my friends and for my fans. It’s time for me to take some real time off to heal.”

Gregg Allman was born in Nashville in 1947. His father, Willis Allman, was shot and killed by a hitchhiker when Gregg was 2. His family eventually moved to Daytona Beach, FL. Gregg’s first guitar was purchased at a Sears store with money he earned from his paper route.

Gregg Allman was married to Cher for a short time in the 1970’s.

To read more about Greg Allman here is his Wikipedia page.

Here is a video of Gregg Allman peforming “Midnight Rider” in Macon, GA in 2015…