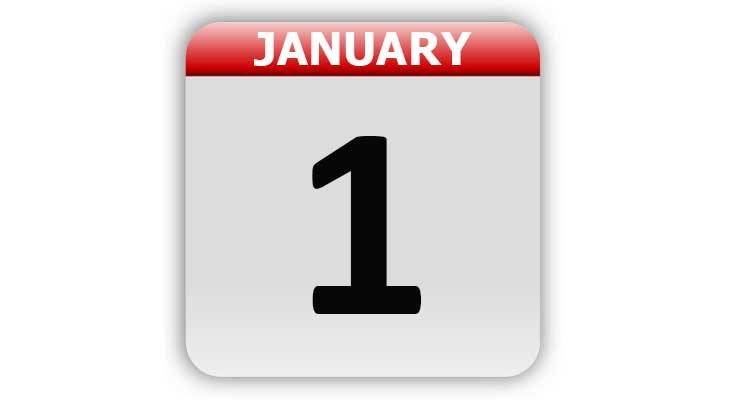 1808 – The United States prohibited importation of slaves from Africa.

1840 – The first recorded bowling match was recorded in the U.S.

1863 – President Abraham Lincoln signed the Emancipation Proclamation, which declared that all slaves in the rebel states were free.

1879 – The present State Capitol building in Lansing, MI was dedicated.

1892 – Brooklyn and New York merged to form the single city of New York.

1902 – The first Tournament of Roses (later the Rose Bowl) collegiate football game was played in Pasadena, CA between Michigan and Stanford.

1909 – The first payments of old-age pensions were made in Britain. People over 70 received five shillings a week.

1916 – The Pantlind Hotel (now the Amway Grand Plaza) opened to the public in Grand Rapids, MI.

1926 – The Rose Bowl was carried coast to coast on network radio for the first time.

1939 – The Hewlett-Packard partnership was formed by Bill Hewlett and Dave Packard.

1954 – NBC made the first coast-to-cost color broadcast when it telecast the Tournament of Roses Parade. There were public demonstrations given across the U.S. on prototype color receivers.

1959 – Fidel Castro overthrew the government of Fulgencio Batista, and seized power in Cuba.

1972 – Michigan lawmakers reduced the legal drinking age from 21 to 18. It remained in effect for seven years (until a petition drive to change it).

1983 – The ARPANET officially changed to using the Internet Protocol, creating the internet.

1984 – AT&T was broken up into 22 Bell System companies under terms of an antitrust agreement with the U.S. Federal government.

1998 – A new anti-smoking law went into effect in California. The law prohibits people from lighting up in bars.

1999 – The euro became currency for 11 Member States of the European Union. Coins and notes were not available until January 1, 2002.

1999 – In California, a law went into effect that defined “invasion of privacy as trespassing with the intent to capture audio or video images of a celebrity or crime victim engaging in a personal of family activity.”

Tags: A Look Back, Celebrity Birthdays, Days of the Year, January 1, Today in History