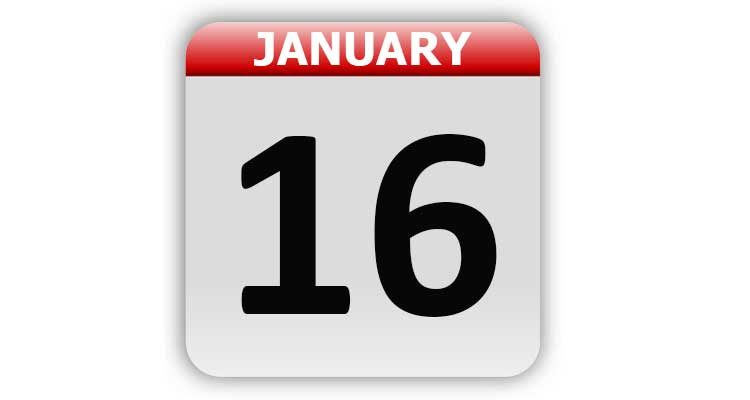 1866 – The metal screw, clamp skate was patented by Everett Barney.

1919 – The 18th Amendment to the Constitution, which prohibited the sale or transportation of alcoholic beverages, was ratified. It was later repealed by the 21st Amendment.

1920 – Prohibition went into effect in the United States.

1961 – Mickey Mantle signed a $75,000 per season contract with the New York Yankees that made him the highest paid baseball player in the American League.

1970 – Buckminster Fuller, the designer of the geodesic dome, was awarded the Gold Medal of the American Institute of Architects.

1985 – “Playboy” magazine switched its binding process, which eliminated the staples that were always an element of its nude centerfolds.

1988 – Jimmy “The Greek” Snyder was fired as a CBS sports commentator one day after telling a TV station in Washington, DC, that, during the era of slavery, blacks had been bred to produce stronger offspring. The comment worked its way to national television, and although Snyder apologized, his TV career was over.

1998 – Researchers announced that an altered gene helped to defend against HIV.

1991 – The White House announced the start of Operation Desert Storm. The operation was designed to drive Iraqi forces out of Kuwait.

1996 – Janet Jackson signed an $80 million recording contract with Virgin Records. It was supposedly the biggest such deal in music history at the time.

1998 – It was announced that Texas would receive $15.3 billion in a tobacco industry settlement. The payouts were planned to take place over 25 years.

2003 – The Space Shuttle Columbia blasted off for mission STS-107 which would be its final one. Columbia disintegrated 16 days later on re-entry.

2004 – Michael Jackson pleaded not guilty to child molestation charges at his arraignment in Santa Maria, CA.

2005 – The TV cooking show “Iron Chef” made its debut in the United States.

2018 – A spectacular fireball meteor lit up the skies in southeast Michigan. The estimated time of the meteor was 8:08 pm. The fireball was also seen from seven states from E. Iowa to W. Pennsylvania plus SW Ontario, Canada. The resulting explosion created a thud strong enough to register as a 2.0 magnitude earthquake.

2020 – The first impeachment of Donald Trump formally moved into its trial phase in the United States Senate.

National Without a Scalpel Day

Tags: A Look Back, Celebrity Birthdays, Days of the Year, January 16, Today in History