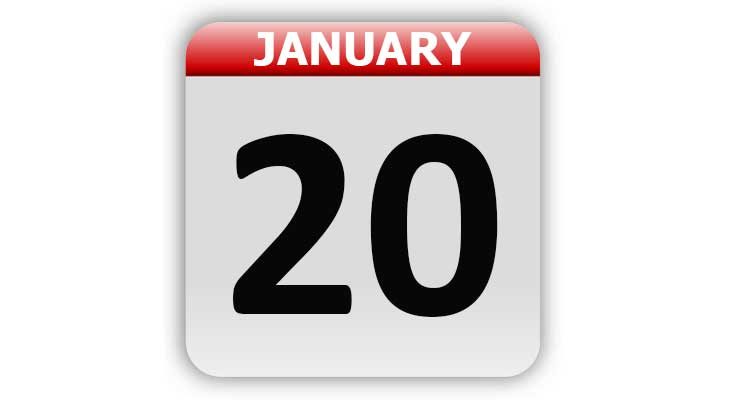 1887 – The Senate approved an agreement to lease Pearl Harbor in Hawaii as a naval base.

1929 – The movie “In Old Arizona” was released. The film was the first full-length talking film to be filmed outdoors.

1937 – Franklin Delano Roosevelt became the first President to be inaugurated on January 20th. The 20th Amendment of the U.S. Constitution officially set the date for the swearing in of the President and Vice President.

1953 – Dwight D. Eisenhower was inaugurate as the 34th President of the United States.

1958 – Elvis Presley got his orders to report to duty from the U.S. Army. He was allowed a 60-day deferment so he could finish the film “King Creole.”

1981 – Iran released 52 Americans that had been held hostage for 444 days. The hostages were flown to Algeria and then to a U.S. base in Wiesbaden, West Germany. The release occurred 20 minutes after Ronald Reagan was sworn in as President.

1982 – Ozzy Osbourne bit the head off of a bat in Des Moines, IA, and was hospitalized to undertake a series of rabies shots.

1985 – Super Bowl XIX was the most-watched Super Bowl game in history as an estimated 115.9 million people tuned in to watch the game. The San Francisco 49ers defeated the Miami Dolphins, 38-16. It also marked the first time that TV commercials sold for a million dollars a minute.

1986 – For the first time, the U.S. observed a federal holiday in honor of Reverend Martin Luther King Jr.

1986 – Britain and France announced their plans to build the Channel Tunnel.

1986 – New footage of the 1931 movie “Frankenstein” was found. The footage was originally deleted because it was considered to be too shocking.

1987 – Anglican Church envoy Terry Waite was kidnapped in Beirut, Lebanon. He was there trying to negotiate the release of Western hostages. He was not freed until November 1991.

1994 – Shannon Faulkner became the first woman to attend classes at The Citadel in South Carolina. Faulkner joined the cadet corps in August 1995 under court order but soon dropped out.

1997 – Bill Clinton was inaugurated for his second term as President of the United States.

1998 – Jury selection began in the federal defamation trial that pitted Texas cattle producers against Oprah Winfrey. The suit concerned comments made during the taping of a 1996 show about dangerous foods that cattlemen say violated Texas’s “food disparagement” law and cost them millions in revenue.

1998 – American researchers announced that they had cloned calves that may produce medicinal milk.

1998 – The television teen drama “Dawson’s Creek” premiered on The WB.

2002 – Michael Jordan, of the Washington Wizards, played his first game in Chicago as a visiting player. The Wizards beat the Bulls 77-69.

2004 – The Salvation Army announced that the late Joan Kroc, widow of the founder of McDonalds, left the organization a bequest of $1.5 billion dollars.

2009 – Barack Hussein Obama was sworn in as the 44th President of the United States, becoming the first African-American President.

2017 – Donald Trump was inaugurated as the 45th President of the United States.

2020 – The first coronavirus case in the United States was confirmed.

Get to Know Your Customers Day

Tags: A Look Back, Celebrity Birthdays, Days of the Year, January 20, Today in History