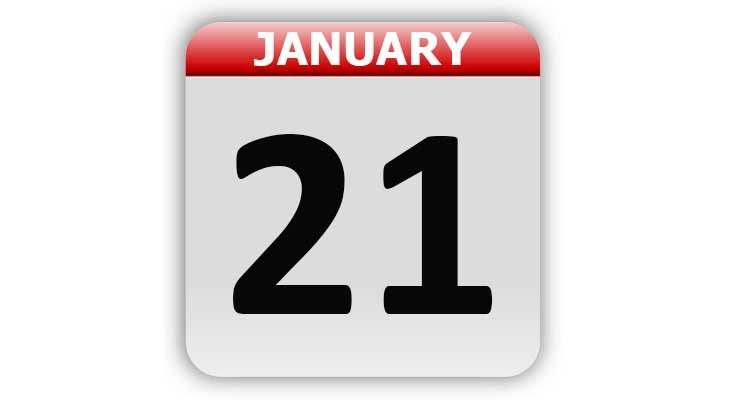 1846 – The first issue of the “Daily News,” edited by Charles Dickens, was published.

1865 – An oil well was drilled by torpedoes for the first time.

1908 – In New York, NY, the Sullivan Ordinance was passed. It made smoking in public places by women illegal. Two weeks later, the measure was vetoed by Mayor George B. McClellan Jr.

1954 – The Nautilus was launched in Groton, CT. It was the first atomic-powered submarine. U.S. First Lady Mamie Eisenhower broke the traditional bottle of champagne across the bow.

1954 – The gas turbine automobile was introduced in New York, NY.

1960 – Little Joe 1B, a Mercury spacecraft, lifted off from Wallops Island, VA, with Miss Sam, a female rhesus monkey on board.

1970 – The Boeing 747 made its first commercial flight from New York, NY to London for Pan American.

1970 – “The Johnny Cash Show”, which began airing on ABC during the summer of 1969, returned to primetime television for the first of what would be just six more shows.

1981 – Production of the DeLorean DMC-12 sports car began in Dunmurry, Northern Ireland. Only 9,000 DeLoreans would be manufactured.

1987 – Aretha Franklin was inducted into the Rock ‘n Roll Hall of Fame. She was the first woman to be inducted.

1990 – MTV’s “Unplugged” made its debut with Squeeze as the first performers.

1994 – A jury in Manassas, VA, acquitted Lorena Bobbitt by reason of temporary insanity of maliciously wounding her husband John, whose penis she cut off with a pair of scissors. She accused him of sexually assaulting her.

1997 – The U.S. House of Representatives voted 395-28 to reprimand Newt Gingrich for ethics violations, making him the first Speaker of the House to be so disciplined.

1998 – A former White House intern, Monica Lewinsky, said on tape that she had an affair with President Bill Clinton. On TV, the President angrily denied that he had sex with “that woman”.

1999 – The U.S. Coast Guard intercepted a ship headed for Houston, TX, that had over 9,500 pounds of cocaine aboard. It was one of the largest drug busts in U.S. history.

2004 – NASA’s MER-A (the Mars Rover Spirit) ceased communication with mission control. The problem was in the management of its flash memory and the problem was fixed remotely from Earth on February 6th.

2013 – Barack Obama took the oath of office and was inaugurated for his second term as President.

2017 – On the first full day of Donald Trump’s presidency, over 400 cities across the U.S., and more than 160 countries worldwide, participated in a large-scale women’s march.

2020 – The very first case of COVID-19 was confirmed. A Washington State man who had travelled from the city of Wuhan in China, where is all started tested positive.

National Use Your Gift Card Day

Tags: A Look Back, Celebrity Birthdays, Days of the Year, January 21, Today in History