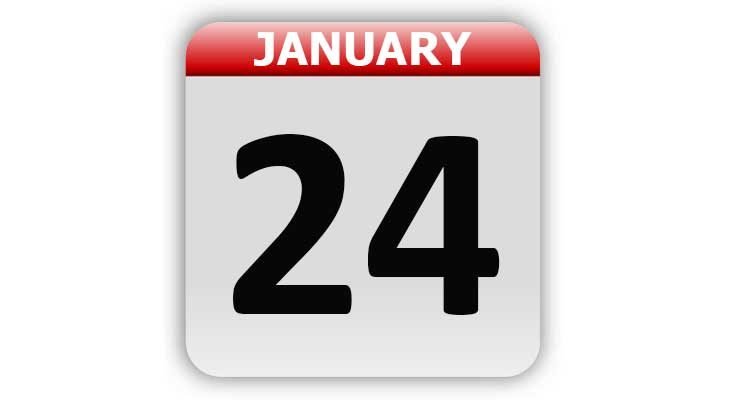 1848 – James W. Marshall discovered a gold nugget at Sutter’s Mill in northern California. The discovery led to the gold rush of ’49. Roughly 750,000 pounds of gold was unearthed.

1908 – In England, the first Boy Scout troop was organized by Robert Baden-Powell.

1922 – Eskimo Pie, the chocolate-covered ice cream treat, was patented by Christian K. Nelson of Onawa, IA. It was originally called the “I-Scream Bar”.

1955 – The rules committee of Major League Baseball announced a plan to strictly enforce the rule that required a pitcher to release the ball within 20 seconds after taking his position on the mound.

1982 – Super Bowl XVI was held at the Pontiac Silverdome in Pontiac, MI.

1985 – Penny Harrington became the first woman police chief of a major city. She assumed the duties as head of the Portland, Oregon, force of 940 officers and staff.

1986 – The Voyager 2 space probe flew past Uranus. The probe came within 50,679 miles of the seventh planet of the solar system.

1989 – Confessed serial killer Ted Bundy was put to death in Florida’s electric chair for the 1978 kidnap-murder of 12-year-old Kimberly Leach.

1995 – The prosecution gave its opening statement at the O.J. Simpson murder trial.

2000 – The U.S. Supreme Court upheld a Missouri law that limited the contributions that individuals could donate to a candidate during a single election.

2018 – Former doctor Larry Nassar was sentenced up to 175 years in prison after being found guilty of using his position to sexually abuse female gymnasts.

National Just Do It Day

Speak Up and Succeed Day

Tags: A Look Back, Celebrity Birthdays, Days of the Year, January 24, Today in History