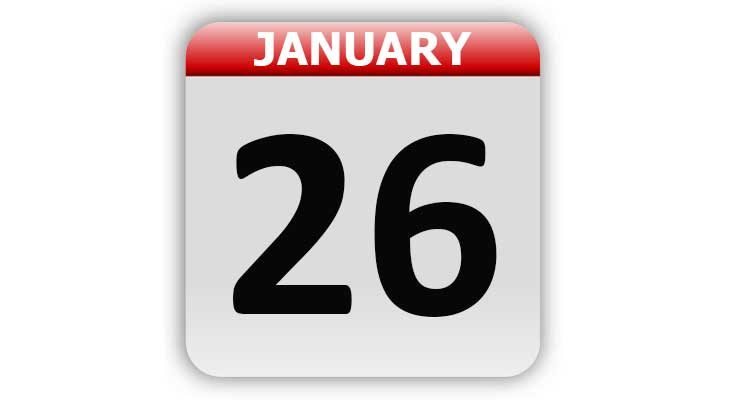 1784 – In a letter to his daughter, Benjamin Franklin expressed unhappiness over the eagle being used as the symbol of America. He wanted the symbol to be the turkey.

1802 – Congress passed an act calling for a library to be established within the U.S. Capitol.

1837 – Michigan became the 26th state to join the United States.

1838 – Tennessee enacted the first prohibition law in the U.S.

1870 – The state of Virginia rejoined the Union.

1915 – The Rocky Mountain National Park was established by an act of Congress. It is one of the most visited National Parks in the country.

1959 – “Alcoa Presents” debuted on ABC-TV. The show would later be renamed “One Step Beyond”.

1961 – President John F. Kennedy appointed Dr. Janet G. Travell as his personal physician, the first woman to hold the position of Physician to the President.

1962 – NASA launched Ranger 3 to land scientific instruments on the moon. The probe missed the moon by about 22,000 miles.

1978 – The Great Blizzard of 1978: A rare blizzard with the lowest non-tropical atmospheric pressure ever recorded in the U.S. (until October 2010) hit the Great Lakes regions with heavy snow and winds up to 100 mph. In West Michigan, two feet of snow was whipped by 60-75 mph winds into 10 ft drifts. The storm killed 20 and left 400,000 stranded along state highways. 50 out of Michigan’s 83 counties declared snow emergencies. Read more about it here.

1984 – Michael Jackson’s hair ignited during the filming of a Pepsi commercial in Los Angeles, CA, leaving him with second degree burns on his head and neck.

1996 – Clear Channel Radio was given approval from the FCC to purchase WOOD Radio in Grand Rapids, MI.

1998 – On a national television broadcast, President Bill Clinton denied having an affair with a former White House intern Monica Lewinsky, saying “I did not have sexual relations with that woman, Miss Lewinsky.”

1999 – The National Transportation Safety Board released their report that concluded that John Denver died in a 1997 airplane crash because he took off with too little fuel in one tank, had trouble switching to his backup tank and inadvertently put his plane into a roll while his attention was diverted.

2003 – Billy Joel was hospitalized for several hours after crashing his car into a tree in Sag Harbor, NY. He was released early the next morning.

2006 – Western Union discontinued use of its telegram service.

2009 – Nadya Suleman, an unemployed 33 year old California divorcée with six other children, gave birth to only the second live born set of octuplets in American history. The media dubbed her “Octomom”.

2010 – It was announced that James Cameron’s movie “Avatar” had become the highest grossing film worldwide.

2020 – Retired L.A. Lakers basketball legend Kobe Bryant died in a helicopter crash in foggy conditions in the hills above Calabasas, southern California. Either others were on board, including his 13 year old daughter Gianna.

Tags: A Look Back, Celebrity Birthdays, Days of the Year, January 26, Today in History