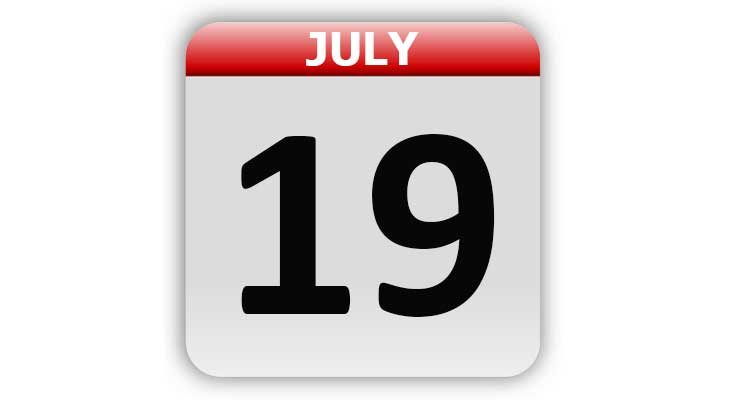 1799 – The Rosetta Stone was found in Egypt. The tablet had hieroglyphic translations into Greek.

1848 – The Women’s Rights Convention took place in Seneca Fall, NY. Bloomers were introduced at the convention.

1939 – Fiberglass sutures were used for the first time by Dr. Roy P. Scholz.

1975 – After being linked in orbit for two days, the Apollo and Soyuz spacecrafts separated.

1982 – The U.S. Census Bureau reported that 14% of the population had an income below the official poverty level in 1981.

1983 – The first three-dimensional reconstruction of a human head in a CT was published.

1984 – Geraldine Ferraro was nominated by the Democratic Party to become the first woman from a major political party to run for the office of U.S. Vice-President.

1985 – Christa McAuliffe, of New Hampshire, was chosen to be the first schoolteacher to ride aboard the Space Shuttle. She died with six others when the Challenger exploded on January 28, 1986.

1995 – The movie “Clueless” premiered in theaters.

1995 – The MTV show “Road Rules” premiered, putting six strangers together to live in an RV and travel across the country.

2005 – Governor Jennifer Granholm signed a law requiring customers to show photo I.D. to purchase some cold and flu medicines. The law was aimed at restricting the sale of pseudoephedrine or ephedrine — the key ingredient for making meth.

2013 – The horror movie “The Conjuring” premiered in theaters.

Tags: A Look Back, Celebrity Birthdays, Days of the Year, July 19, Today in History