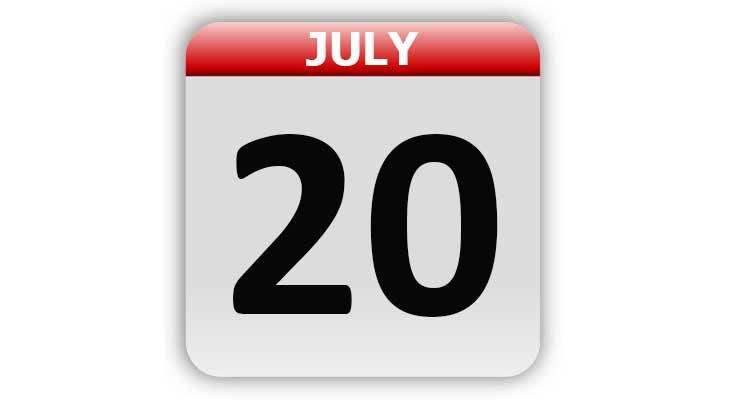 1868 – U.S. legislation ordered tax stamps to be placed on all cigarette packs.

1968 – The first international Special Olympics Summer Games were held at Soldier Field in Chicago, IL, with about 1,000 athletes.

1969 – Apollo 11’s crew successfully made the first landing on the Moon in the Sea of Tranquility. “One small step for man…” Apollo 11 astronauts Neil Armstrong and Edwin “Buzz” Aldrin became the first men to walk on the moon.

1976 – America’s Viking I robot spacecraft made a successful landing on the planet Mars.

1977 – The Central Intelligence Agency released documents under the Freedom of Information Act that revealed it had engage in mind control experiments.

1997 – The fully restored U.S.S. Constitution (also known as Old Ironsides) celebrated its 200th birthday by setting sail for the first time in 116 years.

2012 – James Holmes opened fire at a movie theater in Aurora, CO killing 12 and injury 70 others.

2017 – Magician Criss Angel received a star on the Hollywood Walk of Fame.

2017 – O.J. Simpson was granted parole, after spending nine years of a 33 year sentence in a Nevada jail, for armed robbery charges in Las Vegas, NV.

Tags: A Look Back, Celebrity Birthdays, Days of the Year, July 20, Today in History