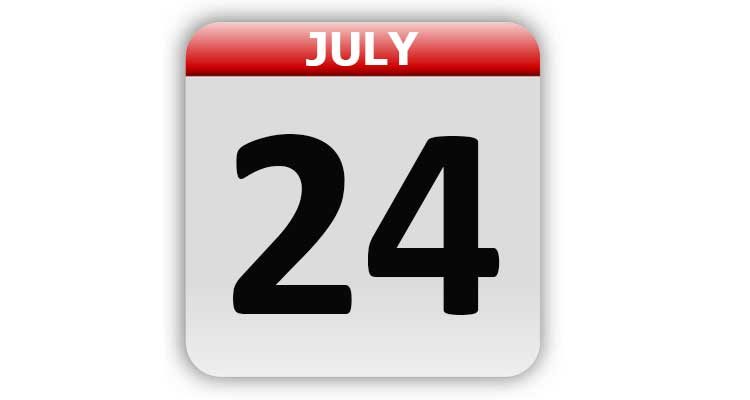 1880 – The first electric light was used in Grand Rapids, MI. The power was generated by water at the Grand Rapids Electric Light and Power Company. The light fixtures were leased on an annual basis for a cost of $120 per year.

1915 – The passenger ship the S.S. Eastland capsized while it was tied to a dock in the Chicago River. A total of 844 passengers and crew were killed. It was the largest loss of life disaster from a single shipwreck on the Great Lakes.

1935 – The Dust Bowl heat waves reached their peak, sending temperatures to 109 degrees in Chicago, IL and 104 degrees in Milwaukee, MI.

1969 – The Apollo 11 astronauts splashed down in the Pacific Ocean.

1974 – The Supreme Court unanimously ruled that President Richard Nixon did not have the authority to withhold subpoenaed White House tapes, and they ordered him to surrender the tapes to the Watergate special prosecutor.

1978 – Escaped 16 ft. python “Big Sid” was captured in Standale, MI. He had escaped his playwood and rope cage on June23rd. Read more about “Big Sid” here.

1983 – George Brett, in a game with the Kansas City Royals against the New York Yankees, had a game winning home run nullified because of pine tar.

1988 – The first West Michigan Grand Prix took place on the streets of downtown Grand Rapids, MI. The event was approved for three years, but only lasted two because of difficulties finding a main sponsor for the third year.

1998 – Russell Eugene Weston, Jr., burst into the U.S. Capitol and opened fire killing two police officers. He was later ruled to be incompetent to stand trial.

2014 – Air Algérie Flight 5017 lost contact with air traffic controllers 50 minutes after takeoff. It was travelling between Ouagadougou, Burkina Faso and Algiers. The wreckage was later found in Mali. All 116 people onboard were killed.

Tags: A Look Back, Celebrity Birthdays, Days of the Year, July 24, Today in History