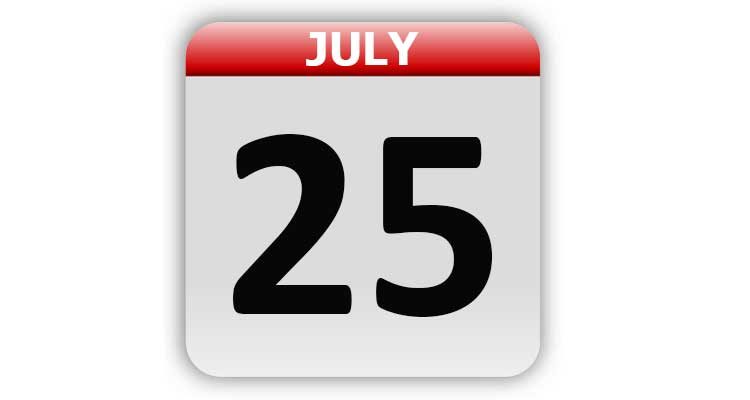 1850 – Gold was discovered in the Rogue River in Oregon.

1866 – Ulysses S. Grant was named General of the Army. He was the first American officer to hold the rank.

1946 – Dean Martin and Jerry Lewis worked as a team for the first time at Club 500 in Atlantic City, NJ.

1956 – The Italian liner Andrea Doria sank after a collision with the Swedish ship Stockholm, 45 miles south of Nantucket Island, killing 51.

1956 – The first guided missile was launched.

1969 – Ted Kennedy pleaded guilty to leaving the scene of an accident in Chappaquiddick, MA.

1978 – Louise Joy Brown, the world’s first test-tube baby, was born in England. She had been conceived through invitro fertilization.

1978 – Pete Rose, of the Cincinnati Reds, had a hit in his 38th straight game to break the National League record for consecutive base hits.

1980 – The band AC/DC released their 7th studio album, “Back in Black”, which became the 2nd best selling album of all time.

1985 – It was confirmed that Rock Hudson had AIDS.

1990 – Rosanne Barr sang the National Anthem in San Diego before a Padres baseball game. She was booed for her performance.

1999 – Lance Armstrong won the Tour de France. He was only the second American to win the race.

2010 – An estimated 1.1 million gallons of raw tar sands crude oil burst from an Enbridge pipeline. The oil spilled into a creek that fed the Kalamazoo River. It was the worst environmental disaster in Michigan to date. The flow of the oil was contained before it reached Lake Michigan.

2010 – WikiLeaks published more than 90,000 internal reports about the War in Afghanistan to the public. It was one of the largest leaks in U.S. military history.

Tags: A Look Back, Celebrity Birthdays, Days of the Year, July 25, Today in History