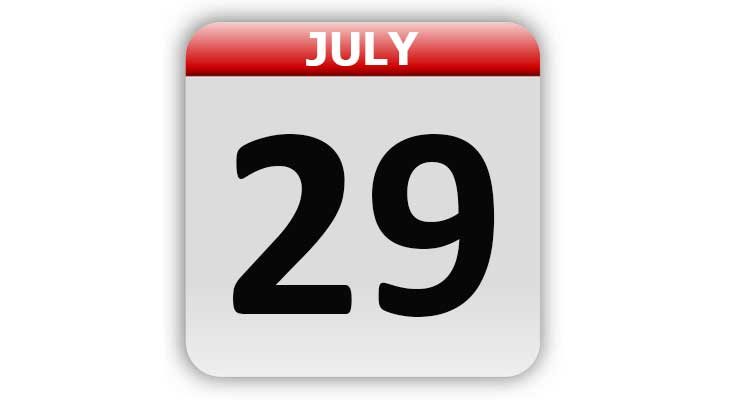 1786 – “The Pittsburgh Gazette” became the first newspaper west of the Alleghenies to be published.

1914 – The first transcontinental telephone service began when two people held a conversation between the cities of New York, NY and San Francisco, CA.

1953 – The Interstate Highway System was created when the Federal Highway Act authorized the building of more than 42,000 miles of highway.

1976 – In New York, NY, David Berkowitz (the “Son of Sam”) killed one person and seriously wounded another in the first of a series of attacks.

1981 – England’s Prince Charles and Lady Diana Spencer were married at St. Paul’s Cathedral in London. Over 700 million people watched the wedding on TV.

1985 – General Motors announced that Spring Hill, TN, would be the home of the new Saturn automobile assembly plant.

1988 – The movie “Cocktail”, starring Tom Cruise, premiered in theaters. Critics hated the movie. It won the Golden Raspberry award for the “Worst Picture” of the year.

1994 – The movie “The Mask”, starring Jim Carrey, premiered in theaters.

2005 – Astronomers announced that they had discovered a new planet named “Xena” that was larger than Pluto in orbit around the sun.

2011 – The 3D live-action/computer-animated comedy movie “The Smurfs” premiered in theaters.

2021 – The International Space Station temporarily spun out of control, moving the ISS 45 degrees out of attitude, following an engine malfunction of Russian module Nauka.

Wil Wheaton – 50 years old (1972) – Actor (Played Wesley Crusher on TV’s “Star Trek: The Next Generation” also appeared as himself on “The Big Bang Theory”, movies “Stand by Me”, “Toy Soldiers”)

National Talk in an Elevator Day

Tags: A Look Back, Celebrity Birthdays, Days of the Year, July 29, Today in History