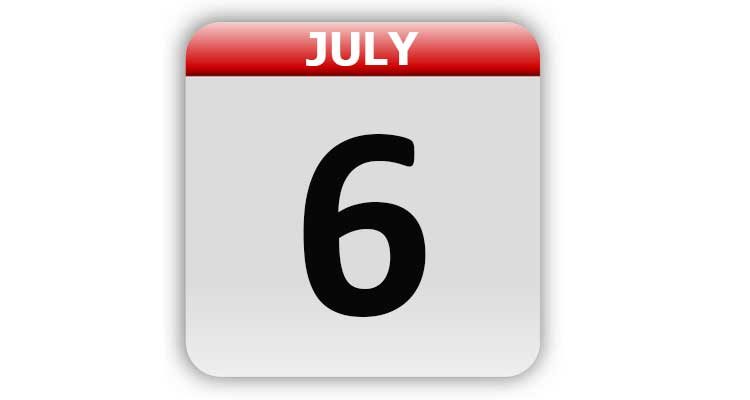 1785 – The dollar was unanimously chosen as the monetary unit for the United States.

1854 – In Jackson, MI, the Republican Party held its first convention.

1885 – Louis Pasteur successfully tested his anti-rabies vaccine on Joseph Meister, a boy who was bitten by a rabid dog. The child used in the test later became the director of the Pasteur Institute.

1898 – Mackinac Island Village Council members banned “horseless carriages” on the island. They were afraid the sputtering motor cars would scare their horses.

1905 – Fingerprints were exchanged for the first time between officials in Europe and the U.S. The person in question was John Walker.

1919 – A British dirigible landed in New York, NY, at Roosevelt Field. It completed the first crossing of the Atlantic Ocean by an airship.

1933 – The first All-Star baseball game was held in Chicago, IL, at Comiskey Park. The American League beat the National League 4-2.

1942 – Diarist Anne Frank and her family took refuge from the Nazis in Amsterdam.

1948 – Frieda Hennok became the first woman to serve as the commissioner of the Federal Communications Commission.

1957 – Althea Gibson won the Wimbledon women’s singles tennis title. She was the first black athlete to win the event.

1957 – As teenagers, John Lennon and Paul McCartney met for the first time, three years before forming The Beatles.

1976 – Women were admitted to the U.S. Naval Academy for the first time.

1981 – The Dupont Company announced an agreement to purchase Conoco, Inc. (Continental Oil Co.) for $7 billion. At the time it was the largest merger in corporate history.

1983 – The U.S. Supreme Court ruled that retirement plans could not pay women smaller monthly payments solely because of their gender.

1988 – Several popular beaches were closed in New York, NY, due to medical waste and other debris washing up on the shores.

1997 – The Mars Pathfinder released Sojourner, a robot rover on the surface of Mars. The spacecraft landed on the red planet on July 4th.

2000 – A jury awarded former NHL player Tony Twist $24 million for the unauthorized use of his name in the comic book “Spawn” and the HBO cartoon series. Co-defendant HBO settled with Twist out of court for an undisclosed amount.

Take Your Webmaster To Lunch Day

Tags: A Look Back, Celebrity Birthdays, Days of the Year, July 6, Today in History