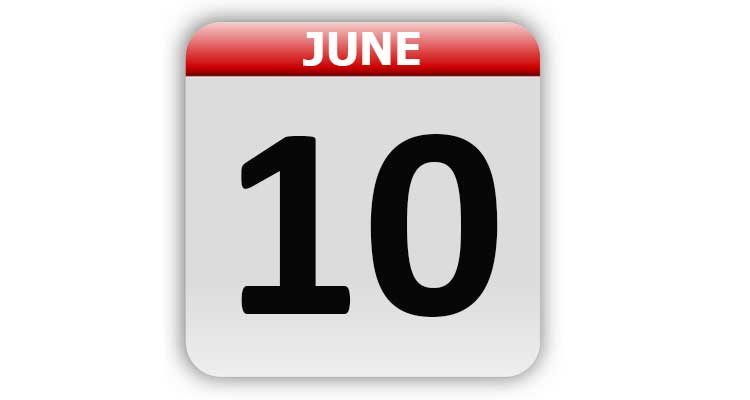 1752 – Benjamin Franklin flew a kite for the first time to demonstrate that lightning was a form of electricity.

1776 – The Continental Congress appointed a committee to write a Declaration of Independence.

1902 – The “outlook” or “see-through” envelope was patented by Americus F. Callahan.

1909 – The SOS distress signal was used for the first time. The Cunard liner SS Slavonia used the signal when it wrecked off the Azores.

1924 – The Republican National Convention becomes the first such political event ever broadcast on radio.

1933 – Bonnie Parker and Clyde Barrow were in a car accident on a rural road in north Texas. The third-degree burns suffered by Parker resulted in a pronounced limp for the rest of her life.

1944 – The youngest pitcher ever in major league baseball pitched his first game. Joe Nuxhall, of the Cincinnati Reds, was 15 years old (and 10 months and 11 days).

1963 – The Equal Pay Act of 1963, aimed at abolishing wage disparity based on gender, was signed into law by John F. Kennedy as part of his New Frontier Program.

1970 – A fifteen-man group of special forces troops began training for Operation Kingpin. The operation was a POW rescue mission in North Vietnam.

1983 – Johnny Bench announced his plans to retire. He was a catcher in the major leagues for 16 years.

1984 – The United States and the Vatican established full diplomatic relations for the first time in 117 years.

1985 – Frank Sinatra was portrayed as a friend of organized crime in a “Doonesbury” comic strip. Over 800 newspapers carried the panel.

1986 – Boomtown Rats singer Bob Geldof was knighted in recognition of his efforts to help starving Africans through “Live Aid”.

1993 – It was announced by scientists that genetic material was extracted from an insect that lived when dinosaurs roamed the Earth.

Tags: A Look Back, Celebrity Birthdays, Days of the Year, June 10, Today in History