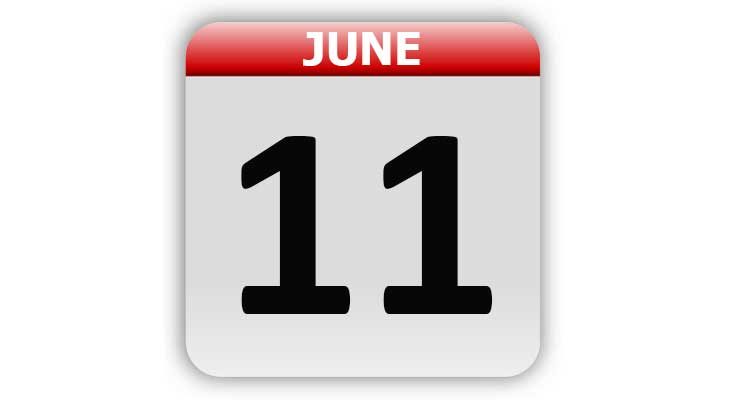 1776 – In America, the Continental Congress formed a committee to draft a Declaration of Independence from Britain.

1805 – A fire consumed large portions of Detroit in the Michigan Territory.

1889 – The Washington Business High School opened in Washington, DC. It was the first school devoted to business in the U.S.

1919 – Sir Barton became the first horse to capture the Triple Crown when he won the Belmont Stakes in New York, NY.

1927 – Charles A. Lindberg was presented the first Distinguished Flying Cross.

1930 – William Beebe dove to a record-setting depth of 1,426 feet off the coast of Bermuda. He used a diving chamber called a bathysphere.

1936 – The Presbyterian Church of America was formed in Philadelphia, PA.

1947 – The U.S. government announced an end to sugar rationing.

1950 – Ben Hogan returned to tournament play after a near fatal car accident. He won the U.S. Open.

1955 – Eighty-three spectators were killed and at least 100 were injured after an Austin-Healey and a Mercedes Benz collided at the 24 Hours of Le Mans. It was the deadliest accident ever in motorsports.

1962 – Frank Morris, John Anglin, and Clarence Anglin allegedly became the only prisoners to ever escape from the prison on Alcatraz Island.

1973 – After a ruling by the Justice Department of the State of Pennsylvania, women were licensed to box or wrestle.

1990 – The U.S. Supreme Court struck down a law that would prohibit the desecration or burning of the American Flag.

1993 – The U.S. Supreme Court ruled that people who commit “hate crimes” could be sentenced to extra punishment. The court also ruled in favor of religious groups saying that they indeed had a constitutional right to sacrifice animals during worship services.

1998 – Amazon.com expanded its product line from books only to compact discs as well.

1998 – Mitsubishi of America agreed to pay $34 million to end the largest sexual harassment case filed by the U.S. government. The federal lawsuit claimed that hundreds of women at a plant in Normal, IL, had endured groping and crude jokes from male workers.

2004 – The movie “Napoleon Dynamite” was released in theaters.

2004 – A remake of the 1975 movie “The Stepford Wives”, starring Nicole Kidman and Matthew Broderick, premiered in theaters.

2012 – TV’s “Good Morning America” host Robin Roberts told viewers she had a rare blood disease and that her sister, WWLTV anchor SallyAnn Roberts, would be her bone marrow donor.

National Corn on the Cob Day

Tags: A Look Back, Celebrity Birthdays, Days of the Year, June 11, Today in History