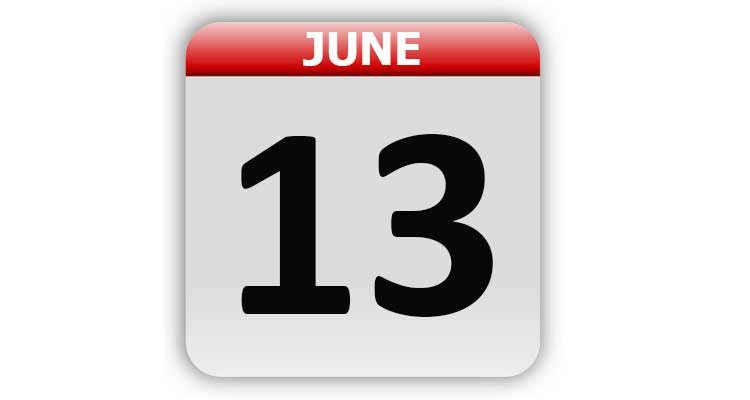 1866 – The 14th Amendment to the U.S. Constitution was passed by Congress. It was ratified on July 9, 1868. The amendment was designed to grant citizenship to, and protect the civil liberties of, recently freed slaves. It did this by prohibiting states from denying or abridging the privileges or immunities of citizens of the United States, depriving any person of his life, liberty, or property without due process of law, or denying to any person within their jurisdiction the equal protection of the laws.

1888 – Congress created the Department of Labor.

1912 – Captain Albert Berry made the first successful parachute jump from an airplane in Jefferson, MS.

1922 – Charlie Osborne started the longest attack of hiccups. He hiccuped over 435 million times before stopping. He died in 1991, 11 months after his hiccups ended.

1924 – The Detroit Tigers lost to the New York Yankees after Tiger pitcher Bert Cole hit Bob Meusel with a pitch. The resulting riot by the 18,000 fans caused a Tiger forfeit.

1927 – Charles Lindbergh was honored with a ticker-tape parade in New York, NY.

1927 – For the first time, an American Flag was displayed from the right hand of the Statue of Liberty.

1948 – Babe Ruth’s #3 was retired as he made his final appearance at Yankee Stadium.

1966 – The landmark “Miranda v. Arizona” decision was issued by the U.S. Supreme Court, which obligates policemen to read arrested persons their constitutional rights.

1977 – James Earl Ray, the convicted assassin of Martin Luther King Junior, was recaptured and returned to jail after escaping for three days.

1979 – Sioux Indians were awarded $105 million in compensation for the U.S. seizure in 1877 of their Black Hills in South Dakota.

1983 – The unmanned U.S. space probe Pioneer 10 became the first spacecraft to leave the solar system. It was launched in March 1972. The first up-close images of the planet Jupiter were provided by Pioneer 10.

1988 – The Liggett Group, a cigarette manufacturer, was found liable for a lung-cancer death. They were, however, found innocent by the federal jury of misrepresenting the risks of smoking.

1989 – Jerry Lee Lewis got a star on the Hollywood Walk of Fame.

1994 – A jury in Anchorage, AK, found Exxon Corp. and Captain Joseph Hazelwood to be reckless in the Exxon Valdez oil spill, allowing victims of the oil spill to seek $15 billion in damages.

1997 – Jurors in Oklahoma City, OK sentence terrorist bomber Timothy McVeigh to death for his part in the 1995 Oklahoma City bombings.

2002 – The Detroit Red Wings won their third Stanley Cup in six years, by beating the Carolina Hurricanes 3-1 at Joe Louis Arena to win the Finals in five games. After the game, coach Scotty Bowman announced his retirement.

2005 – Michael Jackson was found not guilty on all 10 counts in his 14 week child molestation trial.

2007 – Kelly Allen Frank, who was arrested in 2005 for a scheme to kidnap David Letterman’s son and his nanny and escaped from prison on June 8th, was recaptured.

International Axe Throwing Day (I tried axe throwing a few years ago. Here is my blog about my first visit.)

Tags: A Look Back, Celebrity Birthdays, Days of the Year, June 13, Today in History