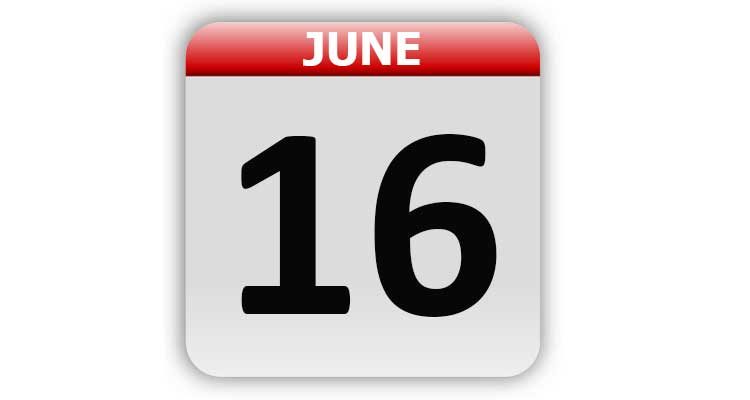 1858 – In a speech in Springfield, IL, U.S. Senate candidate Abraham Lincoln said the slavery issue had to be resolved. He declared, “A house divided against itself cannot stand.”

1884 – At Coney Island, in Brooklyn, NY, the first roller coaster in America opened. It was called the “Switchback Railway”.

1893 – The Rueckheim Brothers produced a new snack called “Cracker Jack”. It was made with popcorn, peanuts, and molasses, and first presented it to the public at the World’s Columbian Exposition (Chicago’s first World’s Fair). Unfortunately, the molasses of this early version was too sticky and the recipe had to be changed.

1883 – The New York Giants baseball team admitted all ladies for free to the ballpark. It was the first Ladies Day.

1897 – The U.S. government signed a treaty of annexation with Hawaii.

1910 – The first Father’s Day was celebrated in Spokane, WA.

1941 – President Franklin D. Roosevelt ordered the closure of all German consulates in the United States. The deadline was set as July 10.

1952 – “Anne Frank: Diary of a Young Girl” was published in the United States.

1955 – The U.S. House of Representatives voted to extend Selective Service until 1959.

1963 – 26-year-old Valentina Tereshkova went into orbit aboard the Vostok 6 spacecraft for three days. She was the first female space traveler.

1992 – President George H.W. Bush welcomed Russian President Boris Yeltsin to a meeting in Washington, DC. The two agreed in principle to reduce strategic weapon arsenals by about two-thirds by the year 2003.

1995 – Pearl Jam began a tour without using Ticketmaster. They chose to use a mail order ticket service.

1998 – The Detroit Red Wings completed a four-game sweep of the Washington Capitals with a 4-1 victory in Game 4 of the Finals. The Red Wings became the first time since the Pittsburgh Penguins in 1991 and 1992 to repeat as champions.

1999 – The U.S. Circuit Court of Appeals said that a 1992 federal music piracy law does not prohibit a palm-sized device that can download high-quality digital music files from the Internet and play them at home.

1999 – Phil Collins received a star on the Hollywood Walk of Fame.

2000 – U.S. Secretary of Energy Bill Richardson reported that an employee at the Los Alamos National Laboratory in New Mexico had discovered that two computer hard drives were missing. The hard drives contained sensitive data. They were later found behind a copying machine.

2011 – New York Democrat Anthony Weiner resigned from Congress, having admitted that he’d tweeted lewd photos to six women over the past few years.

International Day of the African Child

Tags: A Look Back, Celebrity Birthdays, Days of the Year, June 16, Today in History