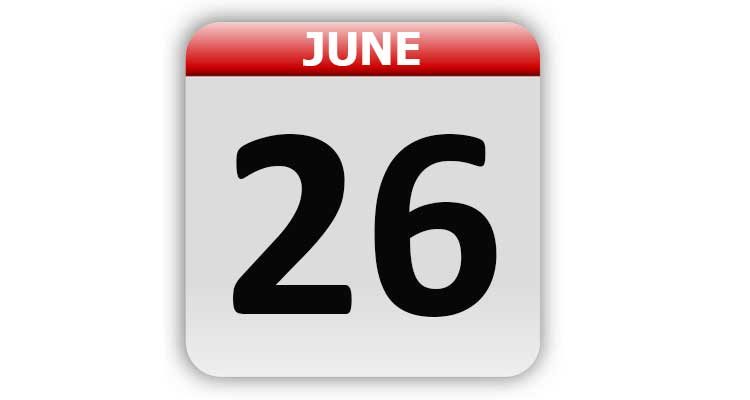 1804 – The Lewis and Clark Expedition reached the mouth of the Kansas River after completing a westward trek of nearly 400 river miles.

1844 – John Tyler took Julia Gardiner as his bride, thus becoming the first President to marry while in office.

1870 – The first section of the boardwalk in Atlantic City, NJ, was opened to the public.

1894 – The American Railway Union called a general strike in sympathy with Pullman workers.

1900 – A commission that included Dr. Walter Reed began the fight against the deadly disease yellow fever.

1936 – The Focke-Wulf Fw 61 made its first flight. It is often considered the first practical helicopter.

1942 – The Grumman F6F Hellcat fighter was flown for the first time.

1963 – President John Kennedy announced “Ich bin ein Berliner” (I am a Berliner) at the Berlin Wall.

1971 – The U.S. Justice Department issued a warrant for Daniel Ellsberg, accusing him of giving away the Pentagon Papers.

1974 – In Troy, OH, a Marsh supermarket installed the first bar code scanning equipment, made by IBM. A Universal Product Code (UPC) bar code was placed on Juicy Fruit gum and a bar code was scanned for the first time.

1979 – Muhammad Ali, at 37 years old, announced that he was retiring as world heavyweight boxing champion.

1981 – In Mountain Home, ID, a woman named Virginia Campbell used her coupons and rebates to buy $26,460 worth of groceries for just 67 cents.

1985 – Wilbur Snapp was ejected after playing “Three Blind Mice” during a baseball game. The incident followed a call made by umpire Keith O’Connor.

1997 – The Supreme Court struck down the Communications Decency Act of 1996 that made it illegal to distribute indecent material on the Internet.

1997 – The Supreme Court upheld state laws that allow for a ban on doctor-assisted suicides.

1998 – The Supreme Court ruled that employers are always potentially liable for supervisor’s sexual misconduct toward an employee.

2000 – The Human Genome Project and Celera Genomics Corp. jointly announced that they had created a working draft of the human genome.

2002 – R. Kelly pleaded not guilty to 21 counts of child pornography in Chicago, IL.

2002 – A federal appeals court in San Francisco, CA ruled that the words “under God” in the Pledge of Allegiance violate the separation of church and state.

2002 – David Hasseloff checked into The Betty Ford Center for treatment of alcoholism.

2013 – The Supreme Court struck down the federal law defining marriage as the union of a man and a woman.

2015 – The U.S. Supreme Court ruled, 5–4, that same-sex couples have a constitutional right to marriage under the 14th Amendment to the United States Constitution.

International Day in Support of Victims of Torture

Tags: A Look Back, Celebrity Birthdays, Days of the Year, June 26, Today in History