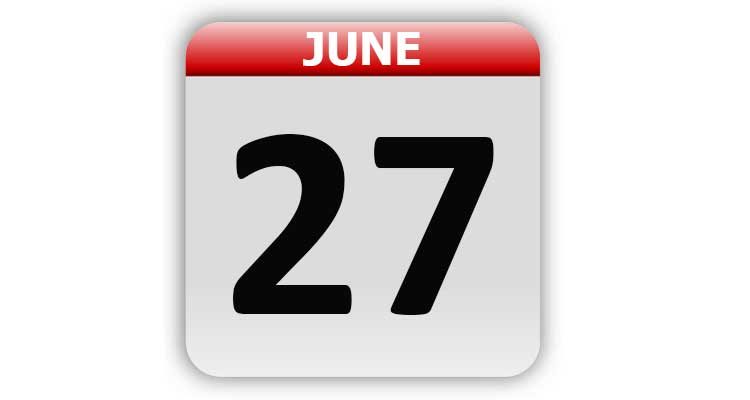 1847 – The cities of New York, NY and Boston, MA were linked by telegraph wires.

1885 – Chichester Bell and Charles S. Tainter applied for a patent for the gramophone. It was granted on May 4, 1886.

1893 – The New York stock market crashed. By the end of the year 600 banks and 74 railroads had gone out of business.

1924 – Democrats offered Mrs. Leroy Springs for vice presidential nomination. She was the first woman considered for the job.

1927 – The U.S. Marines adopted the English bulldog as their mascot.

1929 – Scientists at Bell Laboratories, in New York, NY, revealed a system for transmitting television pictures. The images were of a bouquet of roses and an American flag.

1967 – The world’s first cash dispenser was installed at Barclays Bank in Enfield, England. The device was invented by John Sheppard-Barron. The machine operated on a voucher system and the maximum withdrawal was $28.

1984 – The Supreme Court ruled that individual colleges could make their own TV package deals.

1985 – Route 66 was officially removed from the United States Highway System. Read about my journey on Route 66 here.

1989 – Tom Jones was awarded a star on the Hollywood Walk of Fame.

1991 – Associate Justice Thurgood Marshall resigned from the Supreme Court. He had been appointed in 1967 by President Lyndon Johnson.

1998 – An English woman was impregnated with her dead husband’s sperm after two-year legal battle over her right to the sperm.

2002 – The Securities and Exchange Commission required companies with annual sales of more than $1.2 billion to submit sworn statements backing up the accuracy of their financial reports.

2002 – ABC aired the last regular episode of the TV game show “Who Wants to Be a Millionaire”.

2007 – Tony Blair resigned as British Prime Minister, a position he had held since 1997.

Industrial Workers of the World Day

Tags: A Look Back, Celebrity Birthdays, Days of the Year, June 27, Today in History