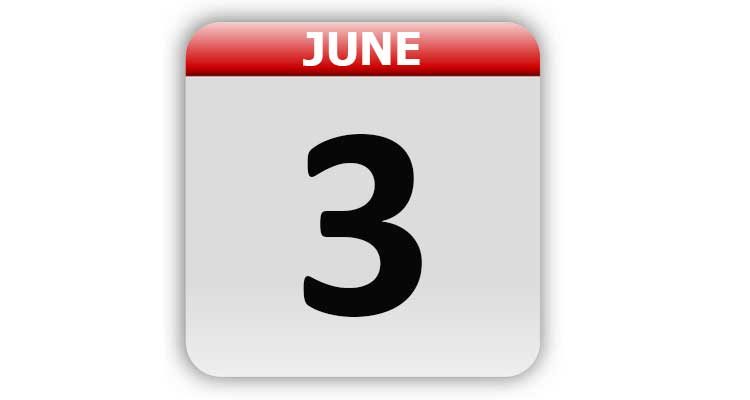 1800 – John Adams moved to Washington, DC. He was the first President to live in what later became the capital of the United States.

1888 – “Casey at the Bat”, the poem by Ernest Lawrence Thayer, was first published in the San Francisco Examiner.

1956 – The city of Santa Cruz, CA, officially banned rock and roll music at public gatherings. Calling it “detrimental to both the health and morals of our youth and community.” The unpopular ban was rescinded a few months later.

1959 – The first class graduated from the Air Force Academy in Colorado Springs, CO.

1964 – Governor George Romney signed a bill that made it a requirement to have photographs on Michigan Driver’s Licenses.

1965 – Edward White became the first American astronaut to do a “space walk” when he left the Gemini 4 capsule.

1965 – James McDivitt became the first Astronaut from Michigan to travel into Space.

1970 – Har Gobind Khorana and colleagues announced the first synthesis of a gene from chemical components.

1980 – The NBA Board of Governors voted to make the 3-point goal a permanent part of pro basketball.

1991 – Willie Nelson began selling his “Who’ll Buy My Memories – The IRS Tapes” album through phone orders. It was later released in stores. The album was made up of songs that had been seized by the government and would go towards paying off his $16 million tax bill.

1999 – Dennis Muren received a star on the Hollywood Walk of Fame.

Tags: A Look Back, Celebrity Birthdays, Days of the Year, June 3, Today in History