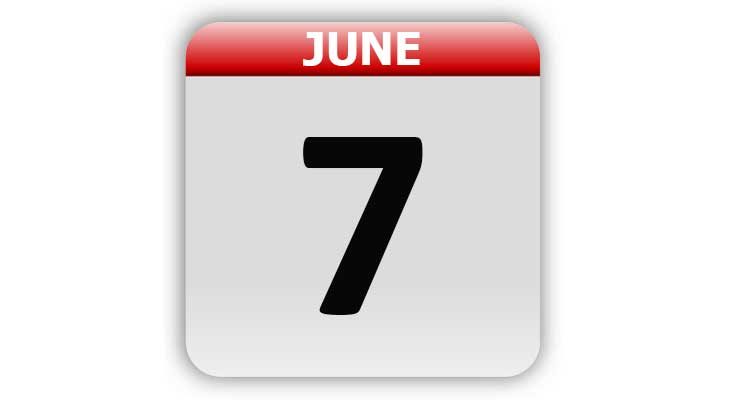 1712 – The Pennsylvania Assembly banned the importation of slaves.

1775 – The United Colonies changed their name to the United States.

1776 – Richard Henry Lee, of Virginia, proposed to the Continental Congress a resolution calling for a Declaration of Independence.

1892 – John Joseph Doyle became the first pinch-hitter in baseball when he was used in a game.

1929 – The sovereign state of Vatican City came into existence as copies of the Lateran Treaty were exchanged in Rome.

1966 – Sony Corporation unveiled its brand new consumer home videotape recorder, the CV-2000. The black and white only unit sold for $995.

1965 – The Supreme Court of the U.S. handed down its decision in Griswold v. Connecticut, effectively legalizing the use of contraception by married couples.

1965 – In the U.S., the Gemini 4 mission was completed. The mission featured the first spacewalk by an American.

1968 – Legoland Billund opened in Billund, Denmark. It was the original Legoland park.

1969 – Johnny Cash debuted his own network show on CBS-TV. It ran for two years.

1976 – TV’s “The NBC Nightly News”, with John Chancellor and David Brinkley, aired for the first time.

1993 – The ground breaking ceremony was held for the Rock and Roll Hall of Fame and Museum in Cleveland, OH.

1993 – On his 35th birthday, Prince changed his name to an unpronounceable symbol, and asked to be referred to as “The Artist Formerly Known As Prince”. In May 2000, he went back to being known as Prince.

1995 – Michael Jackson set a Billboard chart record as “Scream” entered The Hot 100 at #5, the highest debut ever on the chart.

1997 – The Detroit Red Wings completed a sweep of the Philadelphia Flyers with a 2-1 win in Game 4 of the Final at Joe Louis Arena. It was the first championship victory for the Red Wings since 1955.

1998 – In a hate crime that shocked the nation, James Byrd Junior was chained to a pickup truck and dragged to his death in Jasper, TX. Two white men are later sentenced to death for the crime. A third received life in prison.

Tags: A Look Back, Celebrity Birthdays, Days of the Year, June 7, Today in History