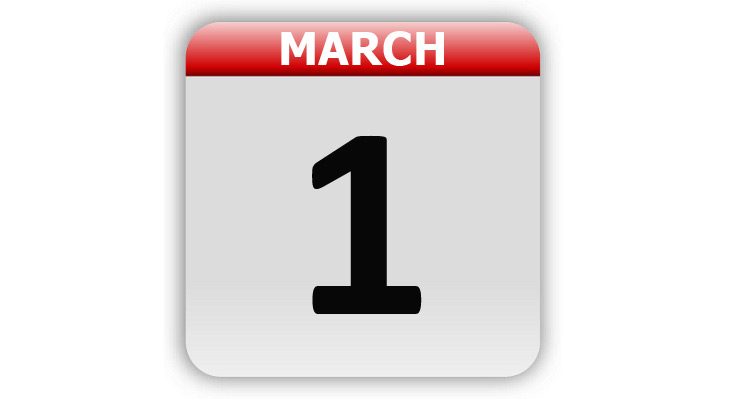 1692 – In Salem Village, in the Massachusetts Bay Colony, the Salem witch trials began. Four women were the first to be charged.

1781 – The Continental Congress adopted the Articles of Confederation.

1869 – Postage stamps with scenes were issued for the first time.

1912 – Captain Albert Berry made the first parachute jump from a moving airplane.

1932 – Charles Augustus Lindbergh Jr., the 22-month-old son of famed aviator Charles and Anne Lindbergh was kidnapped from his nursery on the second floor of their home near Hopewell, NJ. The child was found dead in May.

1937 – In Connecticut, the first permanent automobile license plates were issued.

1941 – The first FM Radio station in the U.S. began operation in Nashville, TN.

1949 – Joe Louis announced that he was retiring from boxing as world heavyweight boxing champion.

1954 – The United States announced that it had conducted a hydrogen bomb test on the Bikini Atoll in the Pacific Ocean.

1954 – Five U.S. Congressmen were wounded when four Puerto Rican nationalists opened fire from the gallery of the U.S. House of Representatives.

1969 – Jim Morrison (The Doors) was arrested and officially charged with lewd and lascivious behavior, indecent behavior, open profanity and public drunkenness in Miami, FL. Morrison was later sentenced. He died while the sentence was under appeal.

1971 – A bomb exploded in a restroom in the Senate wing of the Capitol. There were no injuries. A group protesting the Vietnam War (The Weather Underground) claimed responsibility.

1974 – Seven people were indicted in connection with the Watergate break-in. The charge was conspiring to obstruct justice.

1989 – In Washington, DC, Mayor Marion Barry and the City council imposed a curfew on minors.

1991 – The movie “The Doors”, directed by Oliver Stone and starring Val Kilmer as Jim Morrison, debuted.

1998 – The movie “Titanic” became the first film to gross over $1 billion worldwide.

1999 – Bertrand Piccard and Brian Jones began their attempt to circumnavigate the Earth in a hot air balloon non-stop. They succeeded on March 20, 1999.

2003 – In New York, NY, a $250,000 Salvador Dali sketch was stolen from a display case in the lobby at Rikers Island jail. On June 17, 2003, it was announced that four corrections officers had surrendered and pleaded innocent in connection to the theft.

2003 – Khalid Shaikh Mohammed was captured by CIA and Pakistani agents near Islamabad. He was the suspected mastermind behind the terrorist attacks on the United States on September 11, 2001.

2007 – A 23 year old South Carolina middle school teacher was arrested for allegedly having sex with at least five of her male students. Allenna Williams Ward allegedly had sexual encounters with the 14 and 15 year old boys from December through February at locations including her classroom, a motel, a park and behind a restaurant.

Tags: A Look Back, Celebrity Birthdays, Days of the Year, March 1, Today in History