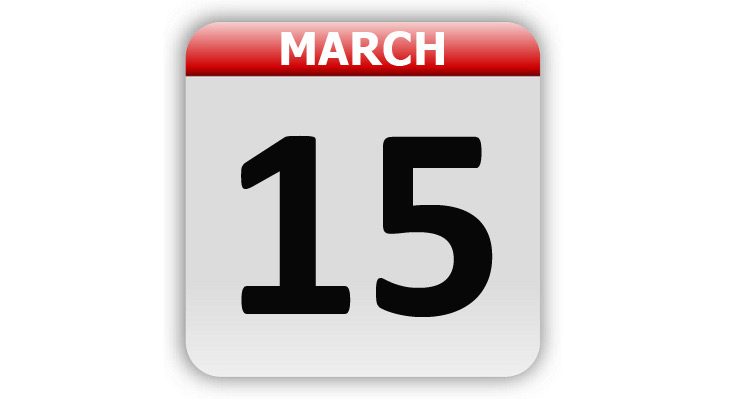 44 BC – Roman Emperor Julius Caesar was stabbed to death by Marcus Junius Brutus, Gaius Cassius Longinus, Decimus Junius Brutus and several other Roman senators on the Ides of March.

1493 – Christopher Columbus returned to Spain after his first trip to the Americas.

1867 – Michigan became the first state to tax property to support a university.

1887 – William Alden Smith, of Grand Rapids, was hired to be the first paid Game and Fish Warden in the United States. His salary was $1,200 a year.

1892 – Jesse W. Reno patented the Reno Inclined Elevator. It was the first escalator.

1937 – At the Cook County Hospital in Chicago, IL, the first blood bank that would preserve blood for transfusion by refrigeration was established.

1968 – The U.S. mint halted the practice of buying and selling gold.

1971 – CBS television announced the cancellation of “The Ed Sullivan Show”.

1972 – The movie “The Godfather” , starring Marlon Brando, opened in theaters.

1972 – Fred Bear became the first person in the Archery Hall of Fame.

1977 – The first episode of the television show “Eight is Enough” and “Three’s Company” aired on ABC.

1977 – The U.S. House of Representatives began a 90-day test to determine the feasibility of showing its sessions on television.

1985 – The first internet domain name is registered to symbolics.com.

1989 – The U.S. Food and Drug administration decided to impound all fruit imported from Chili after two cyanide-tainted grapes were found in Philadelphia, PA.

1989 – The U.S. Department of Veteran’s Affairs became the 14th Department in the President’s Cabinet.

1990 – The Ford Explorer was introduced to the public.

1998 – On the CBS television news magazine “60 Minutes”, former White House employee Kathleen Willey stated in an interview that President Bill Clinton made unwelcome sexual advances toward her in the Oval Office in 1993.

2002 – In the U.S., Burger King began selling a veggie burger. It was the first veggie burger to be sold nationally by a fast food chain.

2005 – After a very lengthy trial in Los Angeles, CA, Robert Blake, once the star of the TV show “Baretta”, was found not guilty of killing his wife Bonny Lee Bakley.

2010 – At the institution’s 25th annual ceremony, Genesis, ABBA, The Hollies, The Stooges and Jimmy Cliff were inducted into the Rock and Roll Hall of Fame.

National Everything You Think is Wrong Day

Tags: A Look Back, Celebrity Birthdays, Days of the Year, March 15, Today in History