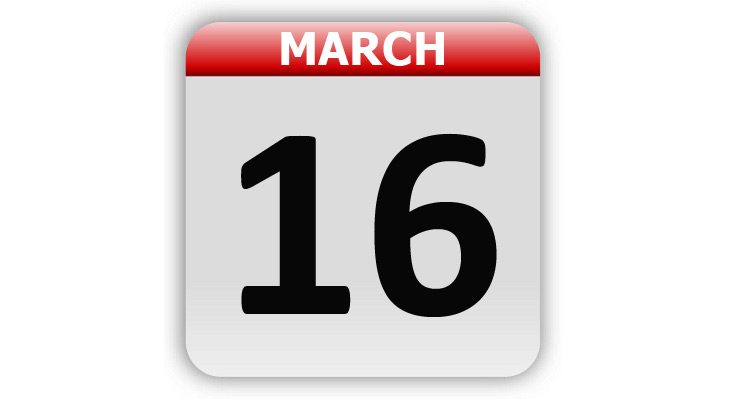 1850 – The novel “The Scarlet Letter,” by Nathaniel Hawthorne, was published for the first time.

1882 – The Senate approved a treaty allowing the United States to join the Red Cross.

1883 – Susan Hayhurst graduated from the Philadelphia College of Pharmacy to become the first woman pharmacy graduate.

1912 – The Metal Office Furniture Company was organized after Peter Wege moved to Grand Rapids, MI. The company would eventually become known as Steelcase.

1958 – The Ford Motor Company produced its 50 millionth automobile — the Thunderbird. The company averaged almost a million cars a year since their founding.

1964 – Paul Hornung and Alex Karras were reinstated to the NFL after an 11-month suspension for betting on football games.

1964 – President Lyndon B. Johnson submitted to Congress a $1 billion war on poverty program.

1968 – U.S. troops in Vietnam destroyed a village consisting mostly of women and children. The event is known as the My-Lai massacre.

1974 – The new Opryland auditorium in Nashville, TN was dedicated.

1984 – William Buckley, the CIA station chief in Beirut, was kidnapped by gunmen. He died while in captivity.

1985 – Terry Anderson, an Associated Press newsman, was taken hostage in Beirut. He was not released until December 4, 1991.

1988 – Indictments were issued for Lt. Colonel Oliver North, Vice Admiral John Poindexter of the National Security Council, and two others for their involvement in the Iran-Contra affair to defraud the United States.

1994 – In Portland, OR, Tonya Harding pleaded guilty to conspiracy to hinder prosecution for covering up the attack on her skating rival Nancy Kerrigan. As punishment, she was fined $100,000 and banned from amateur figure skating.

2020 – Michigan’s Governor, Gretchen Whitmer, ordered bars, restaurants, theaters and casinos to close and restricted gatherings to less than 50 people. She also expanded unemployment benefits as the number of infected cases in the state rose to 54.

2020 – The Dow Jones Industrial Average plummeted by almost 3,000 points. The single day crash was greater than the one that kicked off the Great Depression.

Everything You Do Is Right Day

Tags: A Look Back, Celebrity Birthdays, Days of the Year, March 16, Today in History