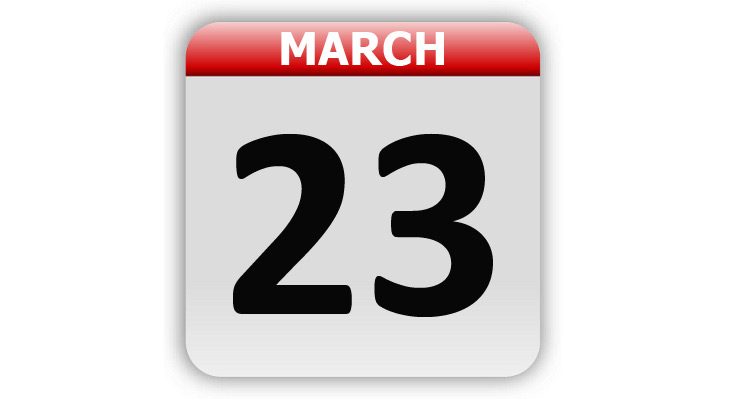 1775 – American revolutionary Patrick Henry declared, “Give me liberty, or give me death!” in Richmond, VA.

1806 – After traveling through the Louisiana Purchase and reaching the Pacific Ocean, explorers Lewis and Clark turned around and began their return journey to the east.

1839 – “OK” first appeared in print in The Boston Morning Post as an abbreviation for “oll korrect”.

1840 – The first successful photo of the Moon was taken.

1857 – Elisha Otis installed the first modern passenger elevator in a public building. It was at the E.V. Haughwout Building  Department Store at 488 Broadway in New York, NY.

1903 – The Wright brothers received a patent for an airplane.

1922 – The first airplane landed at the U.S. Capitol in Washington, DC.

1950 – The television game show “Beat the Clock” premiered on CBS.

1972 – An Evel Knievel motorcycle stunt went wrong. A bad landing after a jump over 35 cars left the daredevil with 93 broken bones.

1973 – The last airing of game show “Concentration” took place. The show had been on NBC for 15 years.

1981 – The Supreme Court upheld a law making statutory rape a crime for men but not women.

1981 – CBS Television announced their plans to cut back “Captain Kangaroo” to a 30-minute show each weekday morning.

1982 – The TV show “Joanie loves Chachi”, a spin-off from “Happy Days”, premiered. It only ran for 17 episodes before being cancelled.

1984 – A woman from Hazel Park, MI gave birth to day baby boy. It was Michigan’s first test-tube baby. Doctors had removed four eggs from the woman, they were fertilized with her husband’s sperm, and then one fertile egg was transferred back into the woman for the baby to developed normally.

1989 – Two electro-chemists, Stanley Pons and Martin Fleischman, announced that they had created nuclear fusion in a test tube at room temperature.

1990 – Former Exxon Valdez Captain Joseph Hazelwood was ordered to help clean up Prince William Sound and pay $50,000 in restitution for the 1989 oil spill.

1991 – During his show at London’s Wembley Stadium, George Michael was joined onstage by Elton John. Their joint performance of Elton’s “Don’t Let the Sun Go Down on Me” was recorded and later became a huge worldwide hit.

1998 – The Supreme Court ruled that term limits for state lawmakers were constitutional.

1998 – The German company Bertelsmann AG agreed to purchase the American publisher Random House for $1.4 billion. The merger created the largest English-language book-publishing company in the world.

2001 – The Russian orbiting Mir space station was disposed of, breaking up in the atmosphere before plunging into the South Pacific Ocean after its 15-years of use.

2020 – Michigan Governor Gretchen Whitmer issued a statewide “Stay At Home” order for all non-essential workers to try to combat the coronavirus, or COVID-19. Individuals were only permitted to leave their home or place of residence under very limited circumstances. The order was to remain in place for at least three weeks.

2021 – A container ship ran aground and obstructs the Suez Canal. It was stuck for six days

Tags: A Look Back, Celebrity Birthdays, Days of the Year, March 23, Today in History