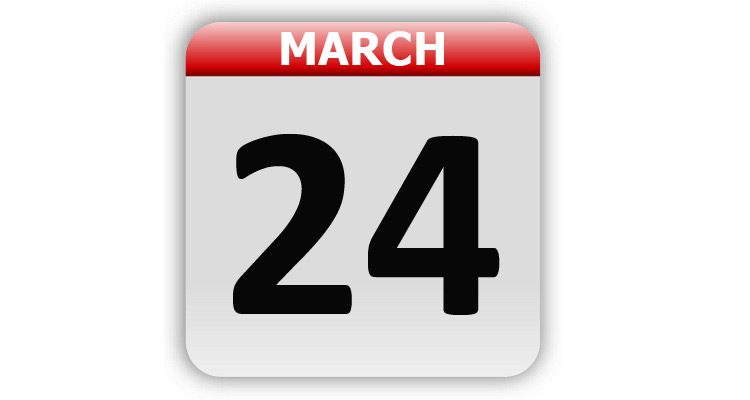 1880 – The first “hail insurance company” was incorporated in Connecticut. It was known as Tobacco Growers’ Mutual Insurance Company.

1900 – Mayor Van Wyck of New York, NY broke the ground for the New York subway tunnel that would link Manhattan and Brooklyn.

1900 – In New Jersey, the Carnegie Steel Corporation was formed.

1904 – The cities of Muskegon and Grand Rapids, MI were hit by tornadoes. Five homes lost their roofs or were torn apart on the lakefront at Harrison Street. In Grand Rapids, ten people were injured when the tornado damaged several barns and a church.

1947 – Congress proposed the limitation of the Presidency to two terms.

1955 – The first oil drill seagoing rig was put into service.

1960 – A U.S. appeals court ruled that the novel “Lady Chatterly’s Lover” was not obscene and could be sent through the mail.

1965 – Images from the Ranger 9 lunar probe were broadcast live on network television.

1989 – The Exxon Valdez spilled 240,000 barrels (11 million gallons) of crude oil in Alaska’s Prince William Sound after it ran aground and ruptured. The captain had been drinking at the time of the accident.

1992 – A Chicago judge ruled in the Milli-Vanilli class-action suit that $3.00 cash rebates would be given to anyone that could prove that they bought the group’s music before November 27, 1990 (the date the lip-synching scandal broke).

1995 – The House of Representatives passed a welfare reform package that made the most changes in social programs since the New Deal.

1998 – In Jonesboro, AR, two young boys opened fire at students from woods near a school. Four students and a teacher were killed and 10 others were injured. The two boys were 11 and 13 years old cousins.

1998 – Amway Corp. announced that it had agreed to pay $9 million to settle a lawsuit over the company’s use of songs by top artists in videotaped sales pitches.

2005 – Sandra Bullock received a star on the Hollywood Walk of Fame.

2005 – The American version of the TV show “The Office” premiered on NBC.

2020 – Japan announced that the Summer Olympics in Tokyo would be postponed due to COVID-19.

Tags: A Look Back, Celebrity Birthdays, Days of the Year, March 24, Today in History