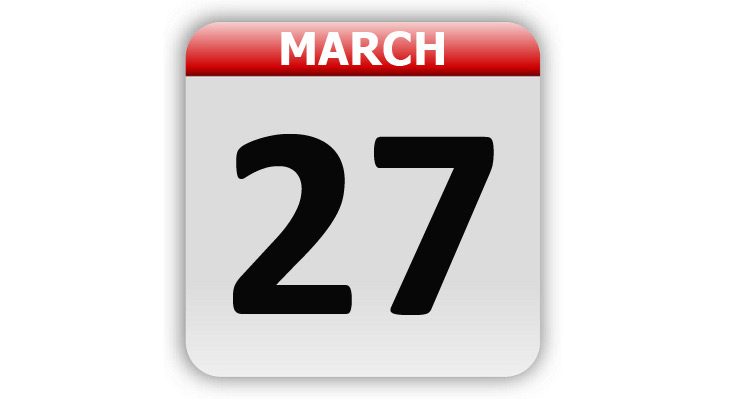 1794 – Congress authorized the creation of the U.S. Navy and the building of six frigates.

1836 – The first Mormon temple was dedicated in Kirtland, OH.

1866 – President Andrew Johnson vetoed the civil rights bill, which later became the 14th amendment. His veto was overridden by Congress and the bill passed into law on April 9th.

1884 – The first long-distance telephone call was made from Boston, MA to New York, NY.

1886 – Geronimo, an Apache warrior, surrendered to the U.S. Army, ending the main phase of the Apache Wars.

1899 – The first international radio transmission between England and France was achieved by the Italian inventor G. Marconi.

1904 – Mary Jarris “Mother” Jones was ordered by Colorado state authorities to leave the state. She was accused of stirring up striking coal miners.

1912 – The first cherry blossom trees — a gift from Japan — were planted in Washington, DC.

1915 – Typhoid Mary, the first healthy carrier of disease ever identified in the U.S., was put in quarantine, where she would remain for the rest of her life.

1917 – The Seattle Metropolitans, of the Pacific Coast League of Canada, defeated the Montreal Canadians and became the first U.S. hockey team to win the Stanley Cup.

1946 – Four-month long strikes at both General Electric and General Motors ended with a wage increase.

1964 – The most powerful earthquake in U.S. history, at a magnitude of 9.2, hit south central Alaska, killing 125 people and causing massage damage to the city of Anchorage.

1983 – The TV mini-series “The Thorn Birds” — based on a novel of the same name by Colleen McCullough — premiered on ABC. It would become the second highest rated mini-series at the time, behind “Roots”.

1985 – Billy Dee Williams received a star on the Hollywood Walk of Fame.

1987 – The band U2 filmed their video “Where the Streets Have No Name” on a rooftop in Los Angeles, CA.

1989 – The U.S. anti-missile satellite failed the first test in space.

1998 – The Food and Drug Administration approved the drug Viagra as a treatment for male impotence. It was the first pill to be approved for this condition in the U.S.

1999 – The Melissa computer virus spread through the Internet.

2011 – The Nintendo 3DS was released in North America.

2020 – President Donald Trump signed the CARES Act into law, pumping more than $2 trillion in federal air back into the economy due to COVID-19.

Julian Glover – 87 years old (1935) – Actor (“The Empire Strikes Back”, “For Your Eyes Only”, “Indiana Jones and the Last Crusade”, “The Fourth Protocol”, “Harry Potter and the Chamber of Secrets”, TV’s “Game of Thrones”)

Tags: A Look Back, Celebrity Birthdays, Days of the Year, March 27, Today in History