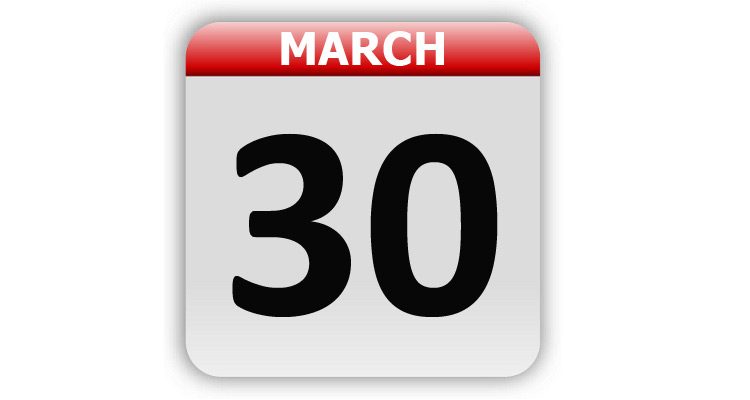 1842 – Dr. Crawford W. Long performed the first operation while his patient was anesthetized with ether.

1870 – The 15th amendment, guaranteeing the right to vote regardless of race, was passed by Congress.

1870 – Texas was readmitted to the Union following Reconstruction.

1909 – The Queensboro Bridge in New York, NY, opened linking Manhattan and Queens. It was the first double decker bridge.

1950 – The invention of the phototransistor was announced.

1964 – The television game show “Jeopardy” debuted on NBC. It was originally hosted by Art Fleming. It has become the longest running game show.

1964 – John Glenn withdrew from the Ohio race for the Senate because of injuries suffered in a fall.

1970 – The television soap opera “Another World – Somerset” debuted on NBC.

1977 – The U.S. Air Force announced it would be closing Kincheloe Air Force Base near Sault Ste. Marie, MI. Personnel and equipment would be transferred to other bases.

1978 – U2, a group of four schoolboys from Dublin, won a talent contest sponsored by the Guinness brewery.

1982 – The Space Shuttle Columbia (STS-3) completed its third and longest test flight after 8 days in space and landed at White Sands Missile Range in New Mexico.

1988 – The movie “Beetlejuice”, directed by Tim Burton, opened in theaters.

1999 – An Oregon jury ordered Philip Morris to pay $81 million to the family of a lung cancer victim.

2004 – Michael Jackson’s teenage accuser testified to the grand jury that was investigating the child molestation case against Jackson.

National I Am in Control Day

National Take a Walk in the Park Day

Tags: A Look Back, Celebrity Birthdays, Days of the Year, March 30, Today in History