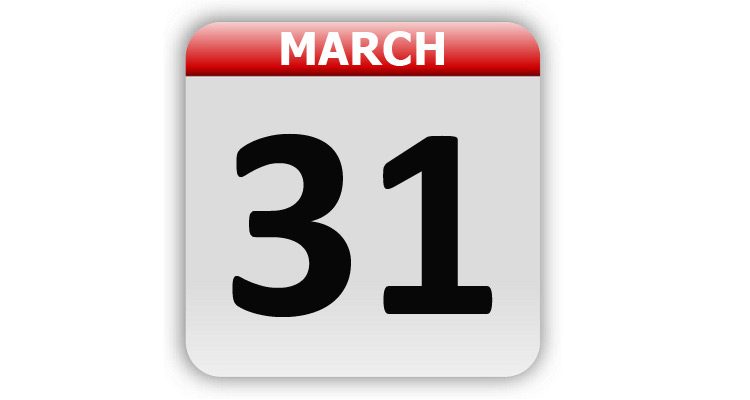 1880 – Wabash, IN, became the first town to be completely illuminated with electric light.

1900 – The W.E. Roach Company was the first automobile company to put an advertisement in a national magazine. The magazine was the “Saturday Evening Post”.

1909 – Construction of the RMS Titanic began.

1917 – The U.S. purchased and took possession of the Virgin Islands from Denmark for $25 million.

1918 – For the first time in the U.S., Daylight Saving Time went into effect.

1933 – The “Soperton News” in Georgia became the first newspaper to publish using a pine pulp paper.

1970 – A Wisconsin group, led by automobile dealer Bud Selig, purchased the bankrupt Seattle Pilots baseball team and moves it to Milwaukee barely in time for the start of the regular season.

1972 – Major League Baseball players went on strike with four days left in spring training, refusing to play exhibition games due to a dispute over pensions. (The walkout would extend into the first week of the season, with most teams losing a half dozen games.)

1976 – A new traffic law went into effect that allowed drivers to make right turns after stopping at a red light. The law was put in place to help conserve fuel.

1976 – The New Jersey Supreme Court ruled that Karen Anne Quinlan could be disconnected from a respirator. Quinlan remained comatose until 1985 when she died.

1984 – The TV show “Lifestyles of the Rich and Famous” hosted by Robin Leach, debuted. The series ran until September of 1995.

1985 – The first WrestleMania, the biggest wrestling event ever from the WWE (then the WWF) took place in Madison Square Garden in New York, NY.

1994 – “Nature” magazine announced that a complete skull of Australppithecus afarensis had been found in Ethiopia. The finding is of humankind’s earliest ancestor.

1998 – Buddy Hackett received a star on the Hollywood Walk of Fame.

1998 – For the first time in U.S. history the federal government’s detailed financial statement was released. This occurred under the Bill Clinton administration.

1999 – The movie “The Matrix”, starring Keanu Reeves and Laurence Fishburne, premiered in theaters.

1999 – Model Fabio is hit in the face by a bird, suffering an inch-long cut, during a promotional ride of a rollercoaster at Busch Gardens theme park in Williamsburg, VA.

1999 – The game Rollercoaster Tycoon was released for computers.

2004 – Google Inc. announced that it would be introducing a free e-mail service called Gmail.

2005 – Terri Schiavo, 41, dies two weeks after doctors remove her feeding tube in response to a court ruling. She had been in a vegetative state since 1990. Her case provoked fierce wrangling in the United States and raised fundamental legal, ethical and scientific questions.

National Clams on the Half Shell Day

Tags: A Look Back, Celebrity Birthdays, Days of the Year, March 31, Today in History