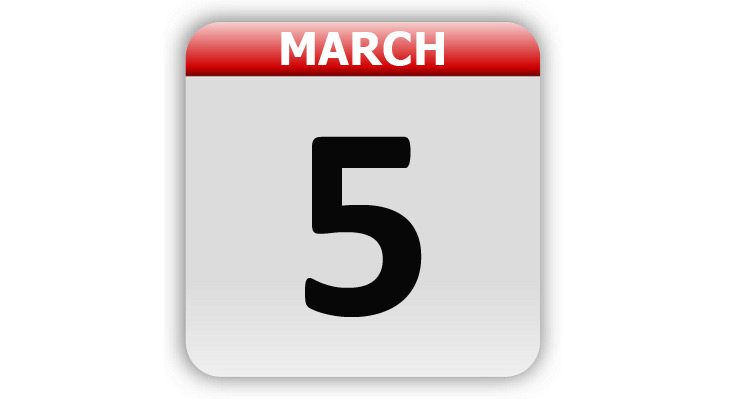 1868 – The Senate was organized into a court of impeachment to decide charges against President Andrew Johnson.

1933 – President Franklin D. Roosevelt ordered a four-day bank holiday, closing all banks and freezing all financial transactions, in order to stop large amounts of money from being withdrawn from banks.

1956 – The Supreme Court affirmed the ban on segregation in public schools.

1957 – Kitty Carlisle made her first appearance on TV’s “To Tell the Truth”.

1960 – Elvis Presley was honorably discharged from the Army.

1971 – While in Belfast, the band Led Zeppelin played “Stairway to Heaven”for the first time.

1976 – One of the worst ice storms in history hit Wisconsin and Lower Michigan. From 2-5″ of ice built up on trees and power lines. Many people power for as long as ten days.

1984 – The U.S. Supreme Court ruled that cities had the right to display the Nativity scene as part of their Christmas display.

1993 – Sprinter Ben Johnson was banned from racing for life by the Amateur Athletic Association after testing positive for banned performance-enhancing substances for a second time.

1994 – Grace Slick was arrested for pointing a shotgun at police in her home.

1997 – Chuck Niles received a star on the Hollywood Walk of Fame.

1998 – NASA announced that an orbiting craft had found enough water on the moon to support a human colony and rocket fueling station.

1998 – It was announced that Air Force Lt. Col. Eileen Collins would lead crew of the Space Shuttle Columbia on a mission to launch a large X-ray telescope. She was the first woman to command a Space Shuttle mission.

2002 – MTV began airing the reality television show “The Osbournes” that followed the daily activities of Ozzy Osbourne and his family.

2004 – Martha Stewart was found guilty on all four counts in her obstruction of justice trial.

2010 – Tim Burton’s version of “Alice in Wonderland” premiered in theaters.

Tags: A Look Back, Celebrity Birthdays, Days of the Year, March 5, Today in History