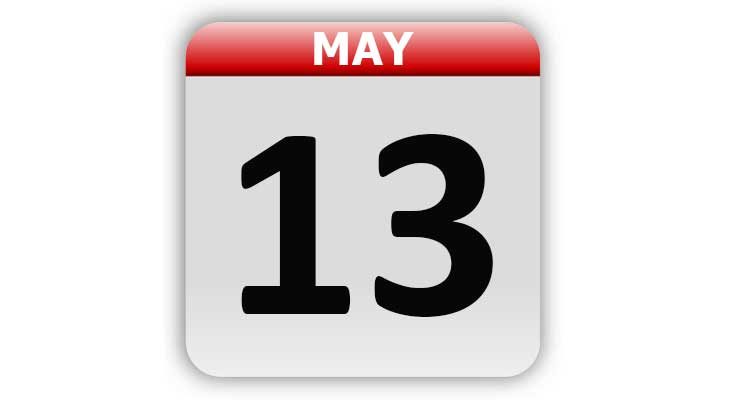 1607 – An expedition led by Captain Christopher Newport arrived at Jamestown, VA. The passengers went ashore the next day, and this site became the first permanent English colony in America.

1821 – The first practical printing press was patented in the U.S. by Samuel Rust.

1911 – The New York Giants set a major league baseball record. Ten runners crossed home plate before the first out of the game against St. Louis.

1918 – The first airmail postage stamps were issued with airplanes on them. The denominations were 6, 16, and 24 cents.

1939 – The first commercial FM radio station in the U.S. was launched in Bloomfield, CT. The station later became WDRC-FM.

1949 – The first gas turbine to pump natural gas was installed in Wilmar, AR.

1958 – Ben Carlin became the first (and only) person to circumnavigate the world by amphibious vehicle. He traveled over 11,000 miles by sea and 39,000 miles by land during a ten-year journey.

1970 – “Let It Be”, a British documentary film starring the Beatles, premiered.

1985 – Tony Perez became the oldest major league baseball player to hit a grand slam home run at the age of 42 and 11 months.

1994 – Johnny Carson made his last television appearance on the “Late Show with David Letterman”.

2002 – Dionne Warwick was arrested at Miami International Airport after baggage screeners found 11 marijuana cigarettes inside her lipstick container. She was later cleared of the charges.

2003 – The U.S. government unveiled a newly designed version of the $20 bill. It was the first to be colorized in an effort to stop counterfeiters.

2008 – A 42 cent postage stamp honoring Frank Sinatra went on sale on the 10th anniversary of his death.

National Blame Someone Else Day

Tags: A Look Back, Celebrity Birthdays, Days of the Year, May 13, Today in History