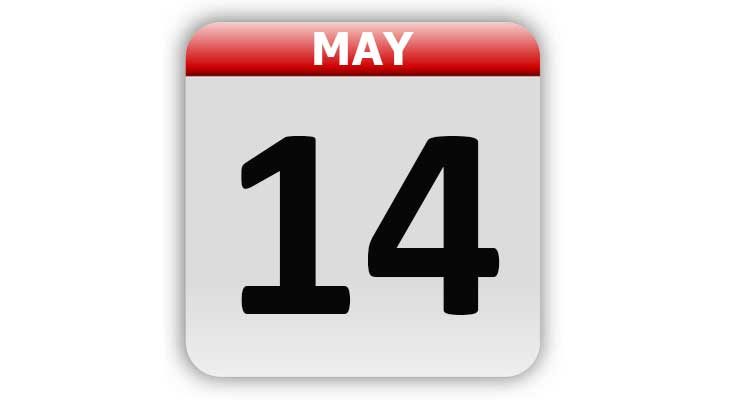 1607 – An expedition led by Captain Christopher Newport went ashore at Jamestown, VA. The group had arrived at the location the day before. This became the first permanent English colony in America.

1787 – Delegates began gathering in Philadelphia, PA, for a convention to draw up the U.S. Constitution.

1796 – The first smallpox vaccination was given by Edward Jenner.

1804 – William Clark set off the famous expedition from Camp Dubois. A few days later, in St. Louis, Meriwether Lewis joined the group. The group was known as the “Corps of Discovery.”

1853 – Gail Borden applied for a patent for condensed milk.

1878 – The name Vaseline was registered by Robert A. Chesebrough.

1897 – “The Stars and Stripes Forever”, by John Phillip Sousa, was performed for the first time. It was at a ceremony where a statue of George Washington was unveiled.

1897 – Guglielmo Marconi made the first communication by wireless telegraph.

1913 – The Rockefeller Foundation was created by John D. Rockefeller with a gift of $100 million.

1939 – Lina Medina became the youngest confirmed mother in medical history at the age of five.

1942 – The Women’s Auxiliary Army Corps (WAAC) was established by an act of the U.S. Congress.

1960 – The birth control pill was introduced in the United States.

1972 – In his first game as a Met, Willie Mays hit a game winning home run against his old team, the Giants.

1973 – Skylab One was launched into orbit around Earth as the first U.S. manned space station.

1989 – The final episodes of TV’s “Moonlighting” and “Family Ties” were broadcast.

1996 – Magic Johnson retired from the Los Angeles Lakers for the second and final time.

1998 – Jerry, Elaine, George, and Kramer went to jail in the final episode of the TV series “Seinfeld” aired after nine years on NBC.

1998 – George Michael pleaded no contest in the Beverly Hills, CA Municipal Court to committing a lewd act in a park restroom. He was fined $810, given 80 hours of community service, and ordered to undergo counseling.

1998 – The animated TV show called “Celebrity Deathmatch” premiered on MTV. Clay models of famous celebrities would wresting each other. The show remained on the air for 6 seasons.

1999 – Jess Marlow received a star on the Hollywood Walk of Fame.

2010 – Space Shuttle Atlantis launched on the STS-132 mission to deliver the first shuttle-launched Russian ISS component — Rassvet. This was originally slated to be the final launch of Atlantis, before Congress approved STS-135.

2021 – Michigan Governor Gretchen Whitmer lifted the mask mandate in all settings for those who were fully vaccinated for COVID-19.

Tags: A Look Back, Celebrity Birthdays, Days of the Year, May 14, Today in History