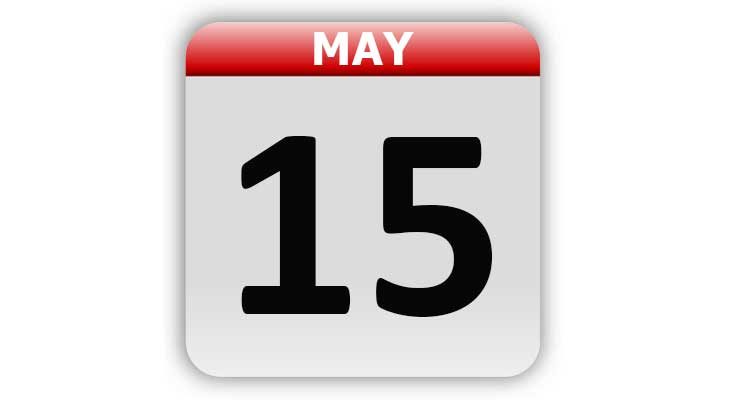 1862 – The U.S. Congress created the U.S. Department of Agriculture.

1905 – Las Vegas, NV, was founded when 110 acres, in what would later become downtown, were auctioned off.

1911 – The U.S. Supreme Court ordered the dissolution of Standard Oil Company, ruling it was in violation of the Sherman Antitrust Act.

1912 – Ty Cobb, of the Detroit Tigers, rushed a heckler during a game and was suspended indefinitely.

1926 – Roald Amundsen and Lincoln Ellsworth were forced down in Alaska after a four-day flight over an icecap. Ice had begun to form on the dirigible Norge.

1926 – The New York Rangers were officially granted a franchise in the NHL. The NHL also announced that Chicago and Detroit would be joining the league in November.

1942 – Gasoline rationing began in the United States. The limit was 3 gallons a week for nonessential vehicles.

1951 – AT&T became the first corporation to have one million stockholders.

1957 – Elvis Presley inhaled a cap that was on one of his teeth. He had to be taken to a Los Angeles, CA, hospital to have it removed from his lung.

1958 – Sputnik III, the first space laboratory, was launched in the Soviet Union.

1963 – The final Mercury mission, Mercury-Atlas 9, with astronaut L. Gordon Cooper on board, was launched. He became the first American to spend more than a day in space and orbited the Earth 22 times in the Mercury spacecraft named Faith 7.

1972 – Alabama Gov. George C. Wallace was shot and paralyzed by Arthur Bremer in Laurel, MD, while campaigning for the Democratic Presidential nomination.

1991 – President George Bush took Queen Elizabeth II to a baseball game played by the Oakland A’s and the Baltimore Orioles.

1997 – The Space Shuttle Atlantis blasted off on a mission to deliver urgently needed repair equipment and a fresh American astronaut to Russia’s orbiting Mir station.

1998 – Sonny and Cher received a star on the Hollywood Walk of Fame.

2010 – Jessica Watson became the youngest person (at the age of 16) to sail, non-stop and unassisted around the world solo.

Bring Flowers To Someone Day

Take Your Parents to the Playground Day

Tags: A Look Back, Celebrity Birthdays, Days of the Year, May 15, Today in History